Meteorologist Explains What The Heck A 'Fogbow' Is 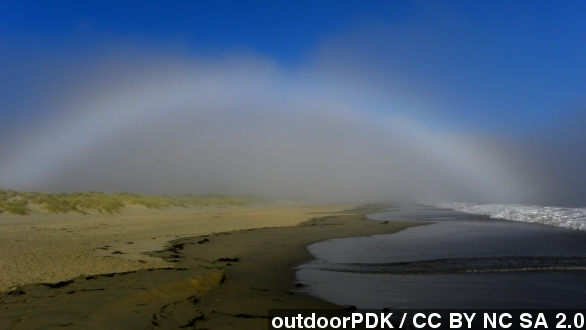 So there are these cool little things called fogbows. They're rare. They're awesome. They're mystical, like unicorns.

But what are they? They look like retro, faded rainbows that stayed out in the sun too long and lost their color.

"Rainbows occur when raindrops are large enough to refract sunlight into these little individual colors that you see there. ... The water droplets in a fogbow are a lot smaller, and so the refractions aren't as precise, so the light scatters from a fogbow and you get a lot of what you call color overlapping, so it looks dull," he said.

Hmm. We feel smarter already. And you can tell — note the smart glasses.

And now we have to know: If there's a pot of gold at the end of the rainbow, what's at the end of a fogbow? Maybe coal because fogbows aren't very bright and shiny.