MERS Outbreak In South Korea Largest Outside Of Saudi Arabia 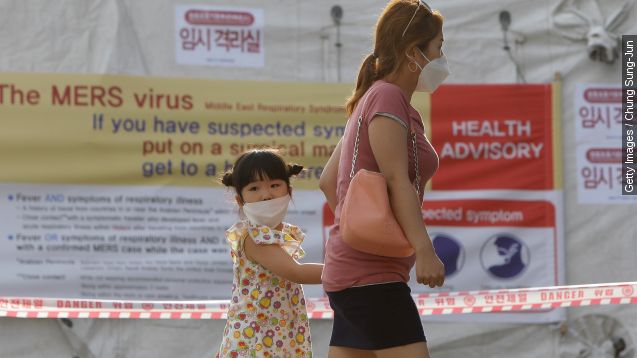 South Korea is in the middle of a MERS outbreak.

South Korea is in the midst of the largest outbreak of Middle East respiratory syndrome coronavirus, or MERS-CoV, to ever occur outside of Saudi Arabia. (Video via KBS)

So far, there have been at least 30 confirmed cases of MERS since the outbreak began on May 20. The World Health Organization is reporting 25 total cases while reports came Wednesday of five more cases. Two people have died so far, and more than 1,300 have been put under various levels of quarantine, according to multiple reports. (Video via Yonhap News TV)

South Koreans aren't taking any chances, either. As of Wednesday, more than 500 schools had canceled classes. (Video via KBS)

South Korean President Park Geun-hye has admitted her country could have done a better job responding to the initial outbreak, saying they misjudged the virus's ability to quickly spread. (Video via YTN)

So what's a virus with Middle Eastern origins doing in South Korea?

The first diagnosed patient in South Korea was a 68-year-old Korean who had recently traveled to four countries in the Middle East. Before May 20, the man had visited two outpatient clinics and two hospitals in Korea, creating ample opportunities for him to infect others. (Video via Yonhap News TV)

There've only been two cases of MERS in the U.S., both in May 2014: one in Indiana and one in Florida. Both patients fully recovered after they were diagnosed in hospitals and were quarantined.

There is no known cure for MERS, and the virus is most deadly for people who have pre-existing illnesses that could develop complications.