Member Of US Military, Possibly Special Forces, Killed By ISIS 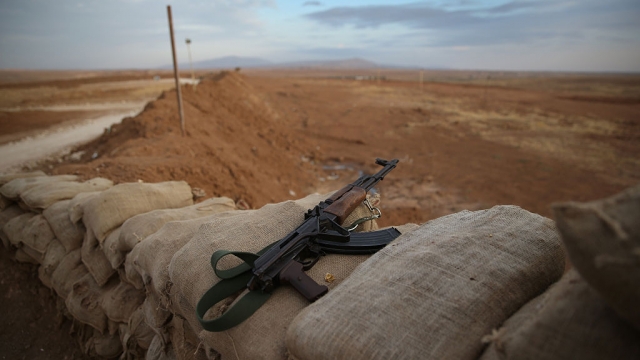 SMS
Member Of US Military, Possibly Special Forces, Killed By ISIS
By Ryan Biek
By Ryan Biek
May 3, 2016
This marks the second U.S. service member death in Iraq within the last three months.
SHOW TRANSCRIPT

ISIS has killed a member of the U.S. military in northern Iraq.

Secretary of Defense Ash Carter confirmed the death Tuesday, saying, "It is a combat death. ... And a very sad loss." Carter did not say which branch of the military the service member was a part of.

But a CBS national security correspondent says the man was an American adviser to the Kurdish Peshmerga force. He was helping a Peshmerga unit a couple miles behind the front line when ISIS militants pushed into Kurdish territory and shot him.

Many of the American soldiers who've been fighting in that area belong to special forces units.

This is the second American death in Iraq this year. ISIS rocket fire killed a Marine at an unpublicized American base in March.

The terrorist group controls large parts of Iraq, and the number of American soldiers have gradually been increasing in the area. As of last month, the Pentagon increased the cap on troops in Iraq to just over 4,000, but more can be rotated into the country on temporary deployments.

This video includes clips from the U.S. Department of Defense, CNN, U.S. Army and ISIS, and images from Getty Images.