Do We Really Need A First Lady? 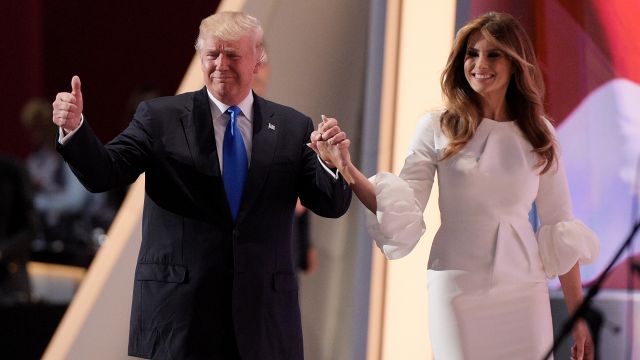 SMS
Do We Really Need A First Lady?
By Matt Picht
By Matt Picht
November 22, 2016
It's a lot of time, money and media attention for an unelected role.
SHOW TRANSCRIPT

Melania Trump's reported decision to delay moving into the White House when her husband takes office could cost New York City millions of dollars in added security and disrupted commerce.

But at least one journalist is cheering the move: In fact, Politico's Jack Shafer argues Melania Trump should go one step further and abdicate the largely ceremonial role of first lady entirely.

Shafer describes the office of first spouse as "a rancid barrel of presidential pork" that serves to "endorse a pernicious kind of neo-nepotism." Shafer notes this isn't meant as a slight on Melania Trump in any way, insisting he was equally prepared to issue this broadside against Bill Clinton.

"First spouse" isn't technically an official position, so there's no salary for the role or anything. But past FLOTUSes have maintained a staff of federal employees. In 2010, Michelle Obama's staff of 18 people was paid $1.5 million.

The role has also given presidential wives a platform to push pet projects. That's relatively uncontroversial when it comes to causes like children's education or healthy eating.

But more assertive first ladies have also dipped their toes into political causes like civil rights and health care, with mixed results.

In terms of time, media attention and money paid to unelected public servants, the closest analogue to the first lady might be the U.K.'s royal family.

But despite her reluctance to move to D.C., Melania Trump has shown no signs of bucking the trend. She's already picked out her personal cause for the next four years: stopping cyberbullying.