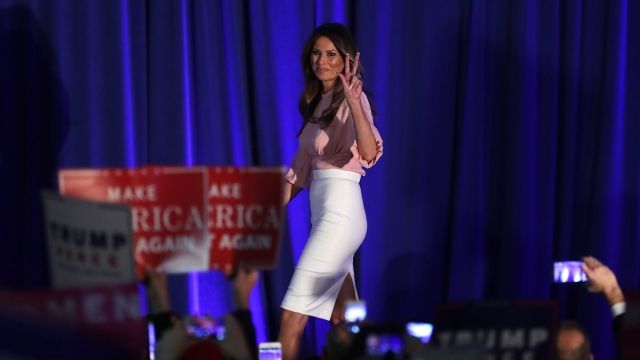 With just five days left in the presidential campaign, Donald Trump brought out one of his most popular but barely seen surrogates: his wife, Melania.

"I have come here today to talk about our partnership, our family and what I know for sure in my heart about this man who will make America great again," Melania Trump said early in her speech.

Melania Trump took the stage Thursday afternoon for her first public speech since the Republican National Convention in July. She discussed her immigration story, her husband's love of country and what she would focus on if she were to become first lady.

Melania Trump said, "I want my little boy to know that he's blessed to have been born in a country that values individual freedom and constitutional democracy."

Melania Trump has been an asset to the campaign — especially in softening her husband's sometimes abrasive image. But she has stayed largely off the campaign trail to raise the couple's 10-year-old son, Barron.

It's no coincidence the campaign sent Melania Trump to a suburb of Philadelphia. Pennsylvania is a battleground state, and the race has tightened there with Hillary Clinton leading by an average of 3.8 points.

The Trump campaign has been trying to gain the support of suburban, educated white women. That's a demographic Republican presidential nominee Mitt Romney won in 2012. Trump is trailing this time around.

"With opportunity, women will advance and achieve. But some women have been left behind. I see that. .... We must break with the failures of the past and embrace a future that is worthy of this great nation and her beautiful people," Melania Trump said toward the end of her speech.

Melania Trump said if she does become first lady, she would focus on improving social media culture, especially for children.

"We have to find a better way to talk to each other, to disagree with each other, to respect each other. We must find better ways to honor and support the basic goodness of our children, especially in social media," she said.