Meet The Tiny, Immortal Hydra, Which Rips Itself Open To Eat 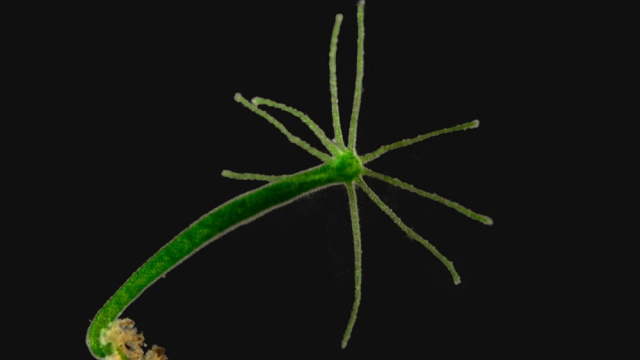 SMS
Meet The Tiny, Immortal Hydra, Which Rips Itself Open To Eat
By Steven Sparkman
By Steven Sparkman
March 8, 2016
Hydras, tiny freshwater organisms known for their ability to seemingly live forever, tear a hole in their bodies to feed.
SHOW TRANSCRIPT

Real hydras are less than half an inch long, appear to be able to live forever and have to rip open their bodies every time they want to eat something.

Researchers at the University of California, San Diego, have recorded the first-ever up close videos of a hydra basically tearing itself a new one, illustrating in gross detail just how the process works.

The typical hydra hangs out in fresh water and waits for small animals to brush against its tentacles, at which point the hydra poisons its prey and drags it into its mouth to be digested.

The new videos show how the cells contract in a ring to turn a solid skin into a mouth opening, which can be wide enough to swallow prey larger than the hydra itself.

It's just one more feature that seems to be unique to hydras. There's also the fact that the tiny killers seem not to age, which has led to new research on how we might someday be able to extend our own lifespans. But let's not copy the mouth thing.