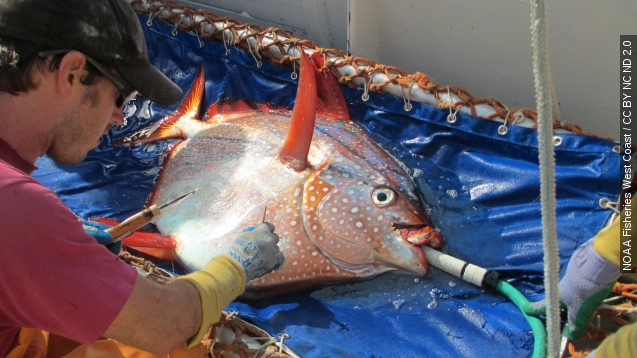 SMS
Meet The Opah, The First Known Warm-Blooded Fish
By Jay Strubberg
By Jay Strubberg
May 15, 2015
The Opah, or moonfish, lives deep below the ocean's surface and uses its unique features to generate and store heat.
SHOW TRANSCRIPT

It's called the Opah, or moonfish, and it lives in cold environments deep below the ocean's surface. Scientists say the Opah generates heat by constantly flapping its pectoral fins. (Video via Science)

It then uses fatty tissue to help trap the heat and special blood vessels to spread the warmth throughout its large, disc-like body.

Fish, of course, are generally thought to be cold-blooded animals, so researchers say this gives the Opah a "competitive edge" over some of its aquatic cousins in more frigid waters.

And, sure, the orange-and-silver fish might look pretty innocent, but researcher Nicholas Wegner of the the National Oceanic and Atmospheric Administration says the opah is actually quite the aggressor.

"Before this discovery I was under the impression this was a slow-moving fish, like most other fish in cold environments. But because it can warm its body, it turns out to be a very active predator that chases down agile prey like squid and can migrate long distances," Wegner said.

Other fish, like tuna and some sharks, can also generate heat, but their bodies can only handle short periods in the cold before they have to retreat to warmer waters. (Video via National Geographic)

The Opah can keep its body warm for long periods of time, so it doesn't have to worry about that as much.

But despite what seems like a pretty cool discovery, at least one scientist was skeptical. At least at how it's labeled, anyway.

The study refers to the Opah as a fish with "whole-body endothermy" or, basically, entirely warm-blooded.

But an associate professor of biology at the University of Massachusetts Dartmouth is quoted in The Washington Post saying that's a bit misleading.

He says the opah is warm for the most part, but, "It gets cold as you go back into the body or back into the tail or as you go up or down," so calling it a "whole-body" warm-blooded fish might be a stretch.

The findings from the Opah study are published in the journal Science.