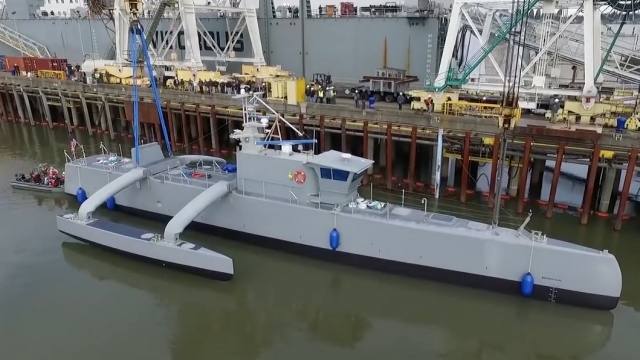 The U.S. military has christened a self-driving warship.

The Sea Hunter can operate for months at a time without a crew on board. It was originally designed to hunt submarines, but officials hope it will fill multiple roles, such as anti-mine operations or transporting cargo.

The ship still has two years of testing before it's deemed safe for missions.

The Sea Hunter comes with a $20 million price tag and costs between $15,000 to $20,000 a day to operate, which actually makes it fairly cost-effective for the Navy.

An analyst tells The Guardian that this might be, at least in part, motivated by Chinese and Russian advancements in naval technology.

Deputy U.S. Defense Secretary Robert Work says he hopes to one day have a whole fleet of autonomous ships operating in the Persian Gulf and Western Pacific in the next five years.

For now, it doesn't have any weapons on board, but if it ever does, Work says the decision to use force will always be carried out by humans.

This video includes a clip from RT and DARPA.