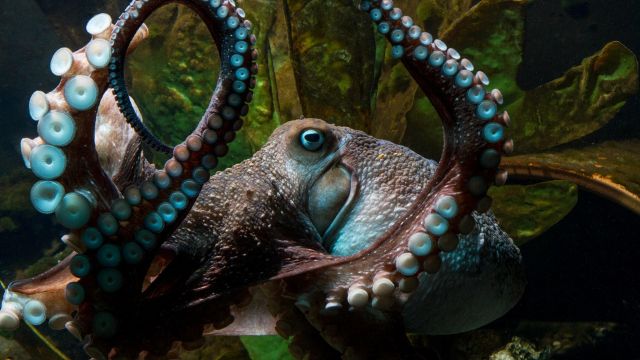 This is Inky the octopus. Though we’re thinking his new nickname should be Houdini.

Under the darkness of night, Inky broke out of his tank at New Zealand’s National Aquarium. He slid down a 6-inch-wide drain pipe and escaped to the Pacific Ocean, leaving a trail of suction cup marks in his wake.

Well, that’s all the space Inky needed to escape. Which is incredibly impressive considering he’s about the size of a football.

But experts say octopuses are known for being master escape artists. An aquarist told ABC News, "The only hard part on an octopus is its beak, and as long as the opening is large enough for that beak to fit through, the octopus can get its whole body through that opening."

As for why Inky would want to leave the comfort of his tank for the great-unknown?

The aquarium manager told The Guardian: "I don’t think he was unhappy with us, or lonely, as octopus are solitary creatures. But he is such a curious boy. He would want to know what’s happening on the outside. That’s just his personality."

Now, the attention is turned to Inky’s tank mate. Staff say they’re going to keep an extra close eye on him from now on.