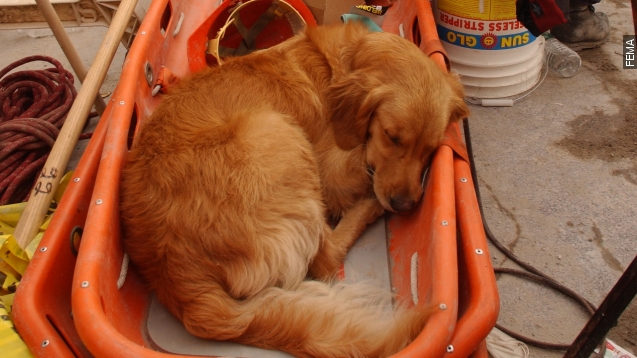 SMS
Meet Bretagne: The Last Surviving 'Ground Zero' Dog
By Eugene Daniels
By Eugene Daniels
September 7, 2015
Hundreds of dogs were deployed to aid search efforts at ground zero on 9/11. Bretagne, a golden retriever, is the last one alive.
SHOW TRANSCRIPT

During the rescue effort at ground zero after the Sept. 11 attacks, about 300 dogs were sent in, both to help search and do what they do best — cheer people up.

"The fireman and the police were completely stone faced, but when they'd see one of the dogs, their eyes lit up a little bit," a trailer for a TV special on the Hero Dogs of 9/11 says.

Bretagne – a 16-year-old golden retriever, is thought to be the last of those four-legged heroes still alive.

Last year, Bretagne and her owner, Denise Corliss, were profiled for the "Today" show when they returned to ground zero. The dogs were the last resort and final authority on whether rescuers could move on from an area.

"It was concerning because you wanted to make sure you had a thorough search before they removed that area," Corliss told Tom Brokaw in 2014.

After 9/11, Bretagne was deployed to the 2002 Winter Olympics in Salt Lake City, and aided search and rescue efforts after Hurricane Rita.

After a much-deserved retirement in 2008, Bretagne serves as an ambassador for search and rescue dogs, all while helping kids practice reading out loud.

This video includes images from Getty Images, FEMA and Chris Zabriskie / CC BY 4.0.