Turns Out Meerkats Are Super Violent. Who Knew? 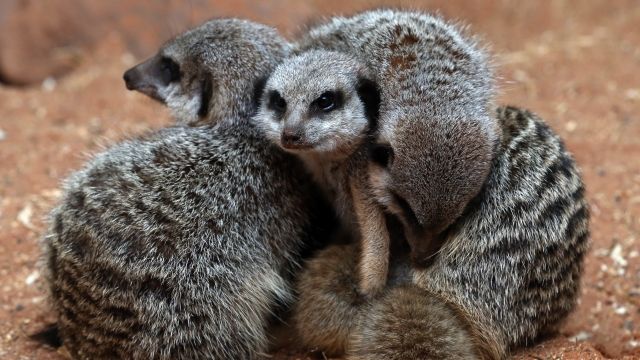 SMS
Turns Out Meerkats Are Super Violent. Who Knew?
By Lindsey Pulse
By Lindsey Pulse
September 29, 2016
A study found the desert creatures are more likely to kill each other than humans are to kill their own kind.
SHOW TRANSCRIPT

Meerkats are actually kind of savage — the furry desert animals are apparently more likely to murder each other than humans are.

A study was looking for the root of human violence. So, it examined death patterns of more than 1,000 mammal species.

The team found lethal violence habits in 40 percent of species studied. And meerkats in particular are more likely to be murdered by one of their own kind than any other species.

Scientists say the root of this behavior can be evolutionary — and it might help explain why humans are inclined to commit violent acts against each other.

Lethal violence is a part of adaptation in many species. As an example, some meerkats kill the young of others to establish dominance.

Not only that, lethal violence can be motivated by a competition for resources, social hierarchy and fights for a mate.

And that's where humans come in. The team says we're not inherently violent like meerkats, but social pressures, competition and learned behaviors do come into play.

It is important to note the study wasn't conclusive in determining the root of human violence; the theories developed were based on patterns using hundreds of data sets.

Following the meerkat on the species-on-species murder scale are red-tailed monkeys. And another shocker: Chinchillas are more likely to kill each other than brown bears are.