Mediterranean Migrants: The Numbers Behind A Deadly Voyage 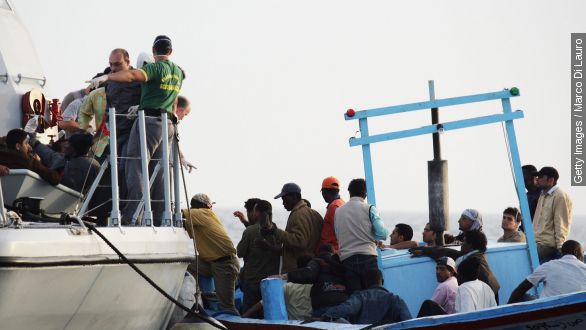 These are the Mediterranean's migrants. (Video via Italian Coast Guard)

The migrants feared dead after Sunday's capsizing are among tens of thousands who have tried making the journey to Europe in the past year.

These migrants are coming via four major routes. But the central Mediterranean crossing — from northern Africa to Italy — is by far the most deadly.

Of those trying to reach Italy by sea in 2014, most were refugees fleeing war-torn Syria, followed by migrants from Eritrea, Mali, Nigeria, Gambia, the Palestinian Authority and Somalia.

Libya is typically the starting point. According to the International Organization for Migration, 170,100 people tried crossing the sea to Italy in 2014 — a number nearly four times what it was the year before.

In all, 3,500 migrants drowned crossing the Mediterranean in 2014 — a sharp uptick from 2013. This year is on course to surpass this number. As many as 800 migrants are feared dead in the latest capsizing. If that number is confirmed, it would bring the total number of migrant deaths in 2015 to around 1,600.

And it's not even summer yet. Humanitarian experts are expecting those numbers to dramatically increase in the coming months when the peak migration season gets underway. (Video via Council of the European Union)