Media Zeroes In On Nike In Obama's Free Trade Speech 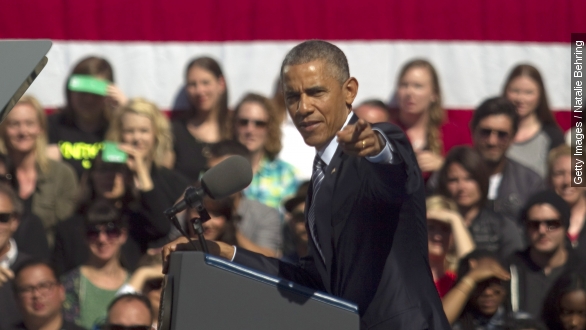 SMS
Media Zeroes In On Nike In Obama's Free Trade Speech
By Ben Lawson
By Ben Lawson
May 8, 2015
Obama delivered his pitch for a free trade deal at Nike headquarters Thursday — a location that rubbed some commentators the wrong way.
SHOW TRANSCRIPT

"Nike announced with the Trans-Pacific Partnership it would make new investments in advanced manufacturing, not overseas but in the United States and far more Nike products would be made in the U.S.A. And that means thousands of more jobs." President Obama said.

On Friday, Obama traveled to Nike's headquarters in Beaverton, Oregon to tout his plans for the Trans-Pacific Partnership or TPP free trade agreement in Asia.

The TPP is being billed as one of the biggest trade deals ever, but the choice of locale for the speech is almost getting more play than the content of the speech itself.

"Apparently some genius in his administration decided that Nike's headquarters, one of the country's largest manufacturing offshorers and outsourcers of American jobs would be the perfect place to promote the benefits of the controversial trade deal known as the Trans-Pacific Partnership" said Fox Business host Lou Dobbs.

Nike might be an iconic American company but it is often heavily associated with outsourcing American jobs. Nike does employ 26,000 domestic workers but that number is dwarfed by the nearly 1 million workers it employs overseas.

But today Nike said the tariff relief plan would allow the company to create 10,000 more jobs stateside. The company also said 40,000 other jobs through construction, suppliers and service companies could be an indirect result of the plan.

Obama likely held the speech at Nike to show how the deal could lead to more jobs and alleviate some fears that it would lead to outsourcing. But it doesn't appear to have worked.

"Okay, Nike can easily create thousands of jobs here in the United States without the lousy trade deal as some experts see it. The president's visit today is an embarrassment to his presidency," said MSNBC's Ed Schultz

The head of consumer advocacy group Public Citizen's Global Trade Watch told CNN, "Why would the President honor a firm that has grown and profited not by creating American jobs, but by producing in offshore sweatshops with rock-bottom wages and terrible labor conditions?"

In a briefing earlier this week, White House Press Secretary Josh Earnest said Obama was using Nike to show how the deal "would strongly benefit middle-class families and the American economy."

Obama doesn't claim in his speech that the Trans-Pacific Partnership will mean more manufacturing jobs in the U.S., which is the type of jobs Nike is accused of outsourcing.

Instead, the president says the deal would lead to more skilled jobs, such as engineering and design.

"What this trade agreement would do is open the door to higher-skill, higher wage jobs of the future, jobs that we excel at," Obama said.

Obama is pushing congress to give him trade promotion authority for the plan, which would reduce Congressional input on the deal to a simple "yes" or "no" vote. This would significantly speed the process along and give the U.S. a stronger hand at the bargaining table, at the cost of legislative oversight on the final deal.

Strangely enough, Obama's push for trade promotion authority has allied him with pro-business Republicans in Congress, while many of the president's fellow Democrats oppose the deal.