Media Wrestles With Whether To Show Charlie Hebdo's Cartoons 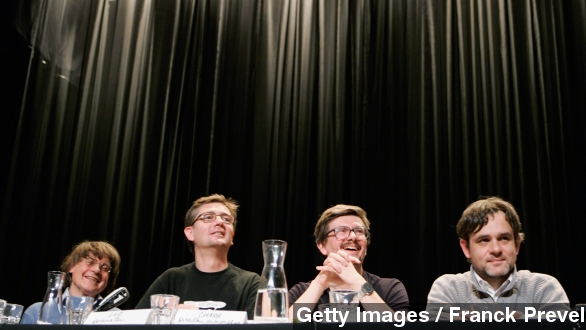 Alongside cartoonists and comedians, many journalists worldwide have expressed solidarity with the people at Charlie Hebdo following the brutal attack on the satirical newspaper's office.

But while covering the attack and explaining why the paper is a target for Muslim extremists, journalists face a choice: whether to show the cartoons of the prophet Muhammad that are at the heart of the story.

Depictions of Muhammad of any kind are considered blasphemous by many Muslims, and Charlie Hebdo's cartoons were often deliberately offensive. So there are two news values at play here: the duty to show context and the reluctance to offend viewers.

You might have seen the images at digital media outlets, like Newsy, including Charlie Hebdo's controversial cover featuring a cartoon of the prophet. That cartoon sparked a firebombing at the paper in 2011.

But some of the biggest legacy news outlets in the world went the other way. U.S. cable news channels shied away from showing cartoons of Muhammad. (Video via Fox News)

The New York Times described the images but didn't show them, New York Daily News blurred them out and The Washington Post only showed one image in one editorial.

So, what was their reasoning for all the blurring and cropping? It had to do, at least in part, with long-standing rules at the big media outlets not to show provocative images. (Video via CNN)

The New York Times' public editor wrote a lengthy piece Thursday about her paper's decision making, quoting executive editor Dean Baquet saying, "We have a standard that is long held and that serves us well: that there is a line between gratuitous insult and satire. Most of these are gratuitous insult. ... At what point does news value override our standards?"

The Guardian said it planned to donate to Charlie Hebdo's next edition, but wouldn't run the cartoons, saying, "Defending the right of someone to say whatever they like does not oblige you to repeat their words."

But sadly, this isn't just a conversation about journalistic ideals. There's also the more pragmatic reason. Several media outlets have admitted they don't want their branch offices to be the site of the next attack.

An editor for the U.K.'s Independent told BBC, "I also felt a duty to my staff, and I think it would have been too much of a risk to unilaterally decide, in Britain, to be the only newspaper that went ahead and published."

As the shooting proves, those concerns are warranted. But in 2012, Charlie Hebdo's editor Stephane Charbonnier, who died in Wednesday's attack, told Fox News that, at least for him, the risk was worth it.