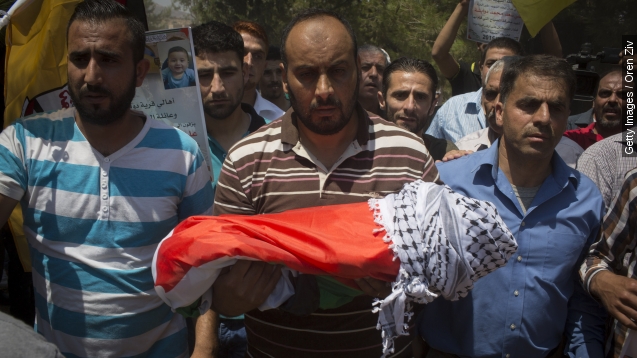 SMS
Media Warns Of 'Escalating Tension' After Palestinian Deaths
By Kate Grumke
By Kate Grumke
August 1, 2015
Recent Palestinian deaths have led to talk of rising tension in the region, but it's too early to say if warnings of more violence are premature.
SHOW TRANSCRIPT

A Palestinian teenager was shot by Israeli forces while protesting the death of an 18-month-old Palestinian toddler. The teen later died of his injuries.

The baby died during an arson attack that is being blamed on Jewish extremists. This graffiti found near the home after the attack reads "revenge" in Hebrew.

The child's parents and 4-year-old brother were severely burned in the attack, and were taken to an Israeli hospital by Israel Defense Forces.

Israeli Prime Minister Benjamin Netanyahu visited the victims in the hospital and called the attack terrorism.

Predictably, the media has reacted with warnings of a conflict much like we saw last year.

"How concerned and prepared are authorities for some sort of escalation?"

Jewish and Israeli outlets are reporting Hamas is trying to capitalize on the attacks by calling for revenge and saying every Israeli is now a target.

But Al Arabiya points out, "Unlike one year ago ... neither side would currently benefit from an immediate and broader conflict."

Israeli officials have said they are searching for the arsonists, who will be punished if found.