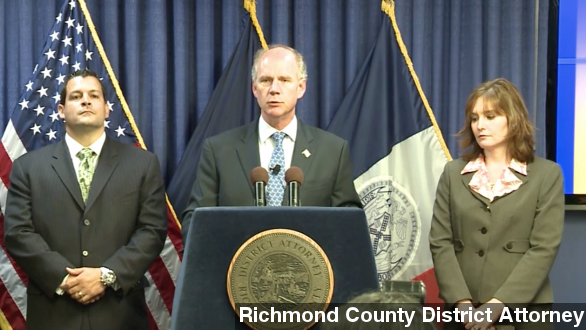 From the outside, Wednesday's Staten Island grand jury decision not to indict Officer Daniel Pantaleo in the death of Eric Garner might seem hard to understand, but there was hope after the announcement that the evidence would soon be made public.

Analyst and professor Jeanne Zaino expressed that hope on WPIX: "I really hope it is, and I hope all of it is. ... Because I think that's where so much of the mistrust occurs that this process has been tainted, that it's secretive."

And Thursday, District Attorney Dan Donovan asked for — and secured — the release of some evidence from the hearings. Unfortunately, it wasn't nearly as much information as people straining to understand the case wanted.

The short document lists a few general details: the grand jury sat for nine weeks, it saw 60 exhibits and heard from 50 witnesses — but the list of exhibits is vague and there are no transcripts of witness testimony.

Part of that is because New York — unlike, say, Missouri — has a highly secretive grand jury process, but another reason is that Donovan didn't ask for transcripts. (Video via Richmond County District Attorney)

That could be a problem for Donovan. The district attorneys from Ferguson and Staten Island are quickly becoming the villains of the media narrative.

As in Ferguson, the Staten Island grand jury heard far more evidence than usual, including a two-hour testimony from Pantaleo. Legal analysts say such lengthy procedures give prosecutors the opportunity to guide the grand jury where they want. (Video via C-SPAN)

Legal analyst Vince Warren told MSNBC, "There is a built-in conflict of interest every time a prosecutor has a police officer in his clutches. It will almost always turn out that there's no indictment."

The argument being made is that prosecutors work side-by-side with police officers most of the time, so prosecuting one of those officers puts them in a tough spot.

But in a case like Eric Garner's that generated so much public outrage, prosecutors can use grand juries as shields, shifting the responsibility away from themselves. (Video via New York Daily News)

That sounds really harsh, but again, that's how legal analysts talking to the media think the case played out. They're really not pulling any punches here.

A Columbia law professor told Gothamist, "[Donovan] can easily shift the political and legal burden to the Department of Justice to decide whether to pursue criminal charges. He's washed his hands of it."

CNN's Jeffrey Toobin was just as blunt: "Daniel Donovan is an elected official. ... I don't want to create a conspiracy here that he buried this case because he wants to ingratiate himself with a conservative electorate, but it is certainly a factor to be considered."

Unfortunately, it's doubtful any more information is forthcoming. To get a full account of what went on in the hearings would require a high-level change to New York law.