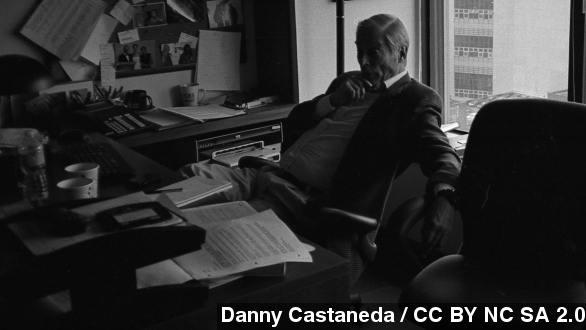 You could see the sorrow on Scott Pelley's face Wednesday as he informed viewers of "60 Minutes" correspondent Bob Simon's death.
"Our colleague, Bob Simon, of '60 Minutes' was 73 years old," said Scott Pelley on CBS.

Simon, a multiple Emmy and Peabody award-winning journalist, was killed in a car crash in New York City Wednesday. He was 73 years old.

"A major loss in the world of television journalism," said Antonio Mora on Al Jazeera.
"Bob Simon was the best of the best. A reporter's reporter. ... Generous, kind, sharp as a tack and obviously someone who would never hesitate to ask hard questions, but he would ask them kindly," said Randall Pinkston on Al Jazeera.

And others reminisced about the journalist's five decade career — one in which he reported on the Vietnam War, conflicts in the Middle East and was even held captive in Iraqi prisons for some 40 days.

"He covered virtually every major overseas conflict in the 1960s, most notably in the Middle East," recounted Anderson Cooper on CNN.

"He was a '60 Minutes' correspondent for 19 seasons. This was his 19th season. He just had a report on this Sunday about Selma," said Brian Stelter on CNN.

Simon is survived by his wife and one daughter, who works as a producer for CBS's '60 Minutes.'