How The Media Reported On Claims Freddie Gray Hurt Himself 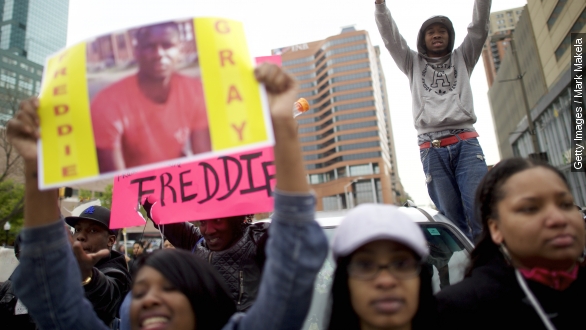 SMS
How The Media Reported On Claims Freddie Gray Hurt Himself
By Jay Strubberg
By Jay Strubberg
April 30, 2015
The Washington Post reports a prisoner riding in the same transport van as Gray says he thinks Gray "was intentionally trying to injure himself."
SHOW TRANSCRIPT

New information has emerged that raises more questions about the death of Freddie Gray, the man who died while in police custody in Baltimore last week.

According to a police document obtained by The Washington Post, an unnamed prisoner riding in the same transport van as Gray, who was separated from him by a metal partition, told officials he heard Gray "banging against the walls" of the vehicle and believes he “was intentionally trying to injure himself."

Twenty-five year-old Gray died April 19 in police custody after suffering a spinal injury, though it's unclear exactly when or how it happened. Baltimore police and the U.S. Department of Justice are currently investigating his death. (Video via The Baltimore Sun)

Given the potential gravity of this inmate's claim, the media reacted to The Washington Post report somewhat differently.

CNN's Don Lemon stated facts and then moved on quickly, "Baltimore police do admit that Gray was not strapped into his seatbelt during that ride which is a violation of policy. Meanwhile, there were 18 new arrests Wednesday in Baltimore."

MSNBC's Rachel Maddow was a bit skeptical, "Leaks like this always serve somebody's purpose. We have no idea who gave this to The Washington Post or what their interests are having done so."

"I want to know: did the President rush to judgement?" Hannity said.

"Congressman, do you think the President rushed to judgement in this case?" a Fox News contributor said.

"Sean, the congressman didn't have much interest in answering your question."

The Post reports the Baltimore police investigator who wrote the document says it's unclear whether there's any other evidence supporting the prisoner's claims. The prisoner was reportedly not identified out of fear for his safety.

The new report comes at an interesting time. Rumors have circulated recently from a site called The Fourth Estate claiming Gray "received spinal and neck surgery a week before he was arrested" — suggesting that could've contributed to his death.

Though the Baltimore Sun claims those rumors are false and says court records point to a different case entirely that has nothing do with a spine injury.