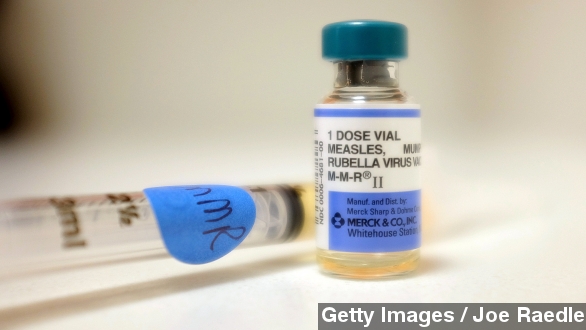 SMS
Media Criticizing Parents For Not Vaccinating Children
By Madison Burke
By Madison Burke
January 28, 2015
As the Disneyland measles outbreak continues to spread, the media says parents who choose not to vaccinate their children are part of the cause.
SHOW TRANSCRIPT

As the Disneyland measles outbreak continues to spread, the media is criticizing parents who choose not to vaccinate their children.

"More and more parents are deciding not to vaccinate their children, and perhaps that might be what's behind this outbreak," CNN anchor Natalie Allen said.

"Which parent would want to put their kids through this?" Dr. David Samadi said on Fox News.

Medical experts believe the outbreak started in Disneyland and then spread quickly through unvaccinated individuals.

The measles vaccine is more than 99 percent effective in preventing the disease, according to the Centers for Disease Control and Prevention. It has been available in the U.S. since the 1960s.

But in recent years, the anti-vaccine movement has grown, spearheaded by those who think vaccines may cause side effects or even lead to autism.

Certain outspoken celebrities have given the movement more publicity.

Most medical experts say the vaccine is safe and point to research contradicting theories that vaccines cause dangerous side effects.

A Forbes contributor even suggested parents who choose not to vaccinate their children should be sued, saying they're putting other children in danger as well.

And USA Today's editorial board echoed these sentiments, saying, "When individuals selfishly refuse to vaccinate their children, seeking a free ride on the rest of the herd, immunity breaks down and innocents are put at risk."

Dozens of people are now infected with the measles as a result of the Disneyland outbreak.