Md. Official Might Sue Us All Over Bizarre Name Spat 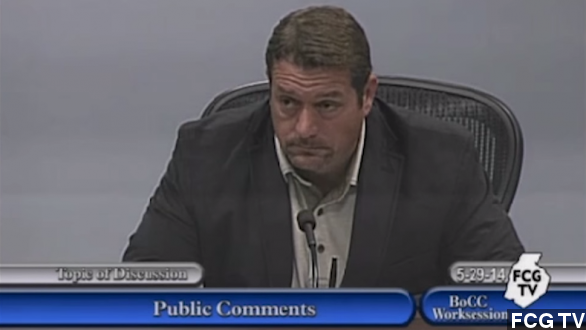 We've just started 2015, folks, and we might've just experienced the most ridiculous dispute of the year.

Internet users joined hand-in-digital-hand to antagonize Frederick County, Maryland commissioner Kirby Delauter after he started a beef with a local newspaper reporter for using his name in an article — without his permission.

The initial exchange took place on Facebook Saturday between Delauter and Frederick News-Post reporter Bethany Rodgers. She used Delauter's name twice in an article about his concerns regarding parking for county officials.

A miffed Delauter then tagged Rodgers in a Facebook post and basically told her to leave him alone. Rodgers reminded Delauter that he's an elected official and it's her job as a journalist to contact elected officials. Fed up, Delauter said, "Use my name again unauthorized and you'll be paying for an Attorney [sic]."

It shouldn't surprise you to know that the Internet sprinted with this one. Delauter's name was meme-ified on Twitter and some users just published posts of Delauter's name. That's it, just his name.

The Frederick News-Post editorial board's approach wasn't much more subtle, using his name 29 times in a response article — three times in the headline — and then spelling out Delauter's name with the first letter of each paragraph.

Maybe — just maybe — the Internet was a little rough on him. But this whole name drama probably isn't helping his reputation.

"Let me rebut that real quick. You said when you came up to the microphone, you were ill-prepared. That's true," Delauter said at a commission meeting.

Videos online show Delauter presumably standing his ground to other members of the community...

"I'm not gonna sit here and be talked to like some punk just because I'm asking questions," Delauter said.

...and Rodgers has written about Delauter on at least one other occasion when he reportedly threatened the mayor with legal action and called one city employee "arrogant as an old lady waiting on chicken." Whatever that means.

Despite the widespread criticism, Delauter took the coverage in stride, telling most people who decided to mention his name on Twitter he plans to sue each and every one of them with the hashtags #permissionnotgranted.