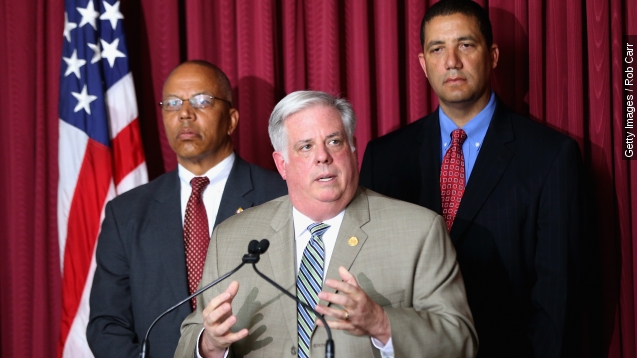 "With my faith, my family and my friends, I know that I won't just beat this disease, but that I'll be a better and stronger person and governor when we get to the other side of it," Maryland governor Larry Hogan said.

Maryland governor Larry Hogan disclosed his advanced cancer diagnosis Monday in a candid press conference that was at times emotional and humorous. (Video via WMAR)

The state's Republican governor, who's first term in office began this January, was recently diagnosed with non-Hodgkins lymphoma. Hogan characterized the cancer as "very advanced and very aggressive," but was optimistic about his chances for recovery.

"My odds of getting through this and beating this are much, much better than the odds I had of beating Anthony Brown," Hogan joked.

The cancer diagnosis is just the latest uphill battle Hogan's had to face during his political career. Hogan began his campaign as a long-shot Republican contender in heavily-Democratic Maryland, but won over the state's voters with his disarming, everyman persona.

During the Baltimore riots, Hogan said "Yesterday, unfortunately, a small group of people acted out in a violent way."

And only a few months into his term, Hogan was faced with the eruption of violent unrest in Baltimore after the death of Freddie Gray. His active, responsive efforts to calm that crisis drew praise from many observers at the time. (Video via C-SPAN)

Our partners at WMAR spoke to an oncologist who estimated Hogan's particular strain of cancer would respond well to treatment.

"The ones that are aggressive actually are the ones that are much more responsive to therapy. That's why we treat them aggressively, because we know that most patients will do quite well," Dr. Robert Donegan said.

Hogan told reporters he expects to spend 18 weeks in treatment, relying heavily on chemotherapy, to beat the cancer. He's not planning to step down during that time, but he will delegate more responsibilities to Lt. Gov. Boyd Rutherford as needed.