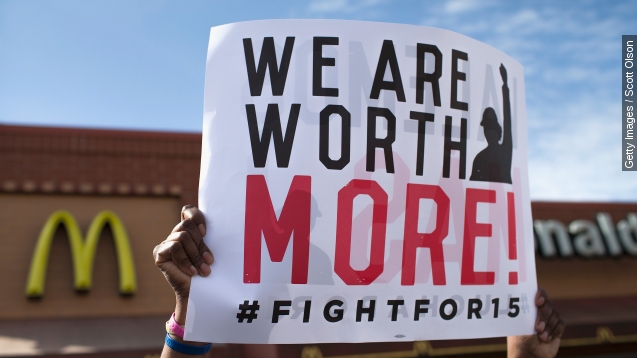 Demonstrators at the company's Oak Brook, Illinois, campus are calling for an hourly wage of $15 and the right to unionize. They plan to collect a million signatures in a petition to support the demands. (Video via WMAQ)

The company shut down a building at McDonald's' headquarters Wednesday when demonstrators came out in force. Police arrested about 100 for trespassing when they pushed onto the campus in Oak Brook. (Video via NBC)

Earlier this year, McDonald’s announced it would raise wages to $1 above local minimum wage for workers at company-owned stores. That applies to about 10 percent of its total employees in the U.S. The rest are franchise operations. (Video via McDonald’s)

So are protests targeting the wrong group? In statements to several outlets, a McDonald's spokesperson said the company cannot address the issue itself:

"When it comes to the minimum wage, that is a national discussion, that is not a McDonald's issue, it's an economic issue. We'll look to the folks in Washington to determine what happens."

In the meantime, the corporate wage hike garnered its own share of criticism — from employees at the more than 12,500 franchise locations who were angry they were left out and from franchisees themselves who felt pressured to raise their own wages.

And it's not clear a direct wage hike would be unambiguously good for workers. According to estimates from the Congressional Budget Office, if the federal minimum wage were raised to $10.10, about 900,000 people would be able to climb out of poverty — but half a million people would also lose their jobs. (Video via WLS)