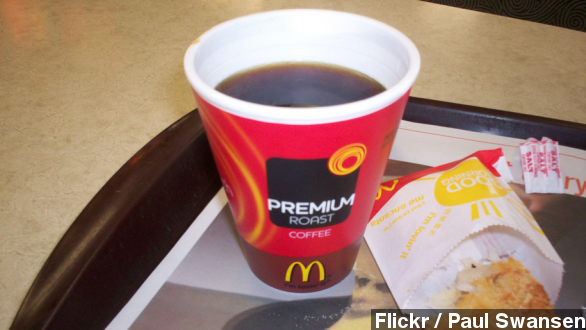 SMS
McDonald's Sued Again For Coffee Burns
By Laura Heck
By Laura Heck
January 9, 2014
Mirroring the famous 1994 lawsuit, an LA woman is suing McDonald's for burns she says she sustained from hot coffee with an improperly placed lid.
SHOW TRANSCRIPT

Some just don't like it hot. Once again, scorching hot coffee could land McDonald's in, well, hot water.

The Los Angeles Times reports an LA woman named Paulette Carr is suing the fast-food chain for injuries she says she sustained in the drive-through in January 2012. The suit says, "The lid for the hot coffee was negligently, carelessly and improperly placed on the coffee cup … resulting in the lid coming off the top of the coffee at the window, causing the hot coffee to spill onto the plaintiff."

The filed suit, however, doesn't go into much detail about her injuries or the amount she could be suing for.

Of course, McDonald's is all "been there, done that." Stella Liebeck famously won $2.9 million in a suit against Mickey D's for severe burns in the '90s. A judge reduced the amount to $640,000, but the case has lived on in pop-culture infamy.

"Very much like urban legends, it is a very compelling story."

JAY LENO: "Now she claims she broke her nose on the sneeze guard at the Sizzler, bending over the chickpeas."

And we can never forget the hot coffee plot line on "Seinfeld."

​LAWYER: "You get me one coffee drinker on that jury, you're gonna walk out of there a very rich man." (Via NBC)

Liebeck's coffee case, and another one filed last year by Joan Fino, fueled a national media obsession with lawsuits that appear to be purely money-grabbing. (Via ABC)

​A 2011 HBO documentary called "Hot Coffee" looked into the backlash against Liebeck.

"Who brings these kinds of frivolous lawsuits?"

"All kinds of people. People who are jackpot-justice oriented."

"The media and corporate America did a masterful job. Mrs. Liebeck became a joke." (Via HBO)

At the time of Liebeck's lawsuit, she was painted almost as a villain. But now the case is being called "America's most misunderstood story" by Business Insider. And the U.K.'s Daily Mail validates how serious Liebeck's injuries were in an article published last October.

Of course, all of this raises the question: Just how hot is too hot?

Despite burns, lawsuits and Kramer jokes, the National Coffee Association recommends an optimum java temperature of between 180 and 185 degrees Fahrenheit.