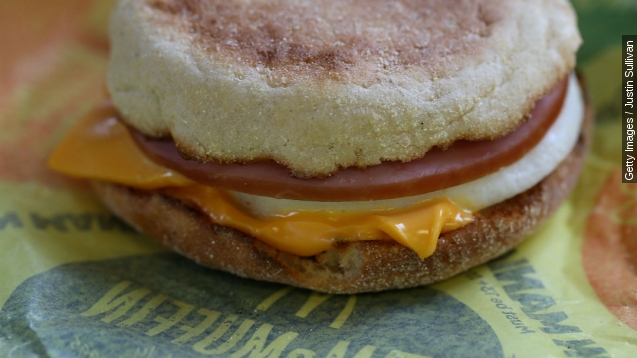 SMS
McDonald's Serves Breakfast All Day Now (Minus Hash Browns)
By Kaileen Gaul
By Kaileen Gaul
October 5, 2015
McDonald's will serve breakfast all day beginning Oct 6. But if you love the hash browns you might be out of luck.
SHOW TRANSCRIPT

Anytime is McMuffin time starting Oct. 6. This is not a drill.

McDonald's announced it will serve breakfast all day starting Tuesday, and the Internet — and probably also your arteries — are freaking out.

Previously, you could only get your hands on McDonald's breakfast before 10:30 in the morning. (Video via McDonald's)

This could be a move to combat Taco Bell in the breakfast battle. Remember when McDonald's pulled this act-of-war on Taco Bell back in April?

"If you can prove you already ate at one fast food chain, another fast food chain will give you a free breakfast,"reported Buzz: 60. (Video via Buzz: 60)

But if you're craving hash browns you might have to find your fix elsewhere. McDonald's spokesperson Linda McComb told Buzzfeed some restaurants can't make hash browns all day because of a “restaurant configuration issue.”

So, if you really want your favorites, you might have to keep getting up before 10:30 am. Your move, Taco Bell. (Video via McDonald's)