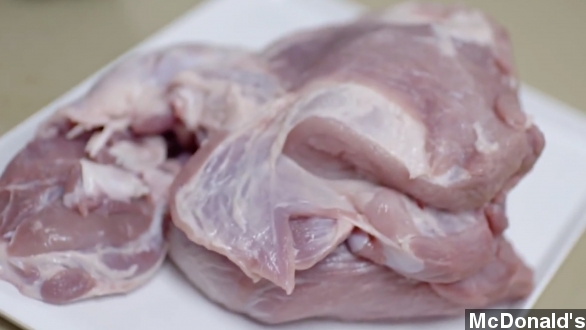 SMS
McDonald's Reveals Process Behind McRib...In An Ad
By Christine Slusser
By Christine Slusser
November 4, 2014
The fast food giant set out to prove to one naysayer that the McRib really is pork. But this is an ad, of course, so how genuine is his response?
SHOW TRANSCRIPT

The golden arches — McDonald's is known for its fast food, yearly Monopoly game and sometimes its seasonal McRib.

Wes Bellamy, just your typical everyday guy, had heard of the McRib — who hasn't? But he thought it looked straight-up "disgusting."

McDonald's found out and wanted to change his mind — and got Grant Imahara from "MythBusters" to tag along, too.

IMAHARA FOR MCDONALD'S: "There's no bones, no gristle. It's all meat."

The video, which is most definitely an ad, says all that's in the McRib is the pork, like you saw; water; salt; dextrose, which is a sugar; and preservatives to hold the flavor.

The ad tries to seem authentic, but some lines do sound scripted. Who knows. Maybe they weren't ... but maybe they were.

BELLAMY: "Oh, so that's how you keep it tasting like my grandma's barbecue."

But the commercial seems to be getting people's attention. It has more than 171,000 views after just one day online.

And telling people where their food comes from is a bit of an advertising trend right now. Target came out with an ad earlier this year about coffee beans.

"Target was the first major retailer to sell direct-trade coffee. ... Direct trade means tracing the beans back to the original farmer."

So, clever ads, but then again, they are meant to make the brands look better.