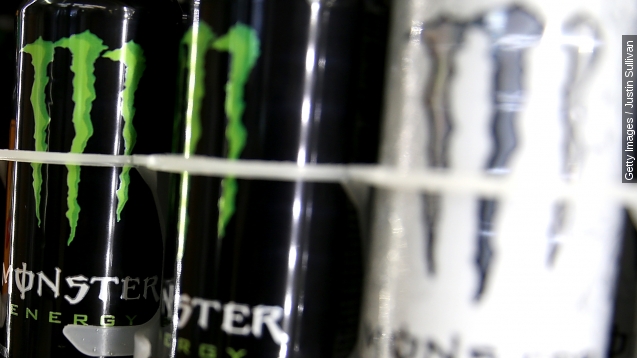 SMS
McDonald's Is Testing Out Monster Energy Drinks
By Ryan Biek
By Ryan Biek
October 21, 2015
McDonald's is testing sales of Monster energy drinks in 20 of its U.S. stores. Will it hurt the chain's progress toward a healthier image?
SHOW TRANSCRIPT

McDonald's coffee isn't for everyone.

Which could be why the fast-food company is testing Monster energy drinks at some of its locations.

McDonald's is currently selling the energy drinks in 20 of its 14,000 restaurants in the U.S. McDonald's wouldn't confirm if there are plans for expansion of the sales, but a spokesperson told Bloomberg this is another example of the fast-food chain getting feedback from customers. (Video via McDonald's)

Bloomberg quotes an Evercore analyst who predicted the potential agreement could boost Monster earnings by as much as $2 a share.

Being featured in McDonald's restaurants across the country could be the boost Monster needs. Based on recent market share estimates, Red Bull just edges out Monster. (Video via Red Bull and Monster Energy)

And McDonald's already has a distribution deal with Coca-Cola, which bought a 17 percent stake in Monster last year. (Video via Coca-Cola Co.)

The only downside could be discrediting McDonald's attempts to gain a healthier image. (Video via McDonald's)

Energy drinks' side effects have been questioned for years, and the American Medical Association suggested a ban on marketing them to children under 18.

Monster, however, says its products have half the caffeine of Starbucks coffee per ounce.

A McDonald's spokeswoman wouldn't comment to The Wall Street Journal on health concerns about the energy drinks or possible age restrictions for its sales.