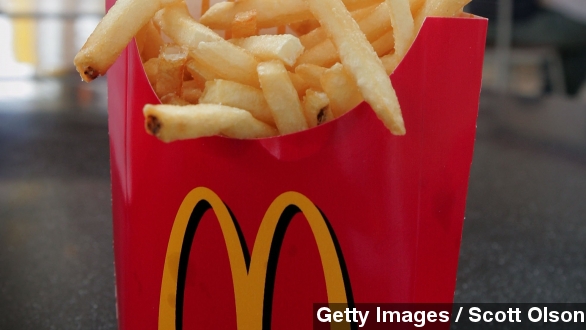 Looking at a table of fries, Ana Kasparian of The Young Turks said, "That looks so good." Yeah, pretty much.

Now if you are a McDonald's fry enthusiast, maybe you've seen some of these concerning headlines. Really? Nineteen ingredients into one tiny fry?

"These look like potatoes, but are they really potatoes?" Bottom line — yes, every McDonalds fry is actually cut from a real life non-genetically modified potato.

So where exactly do all the ingredients fit in? Well first of, all let's clear something up.

"There are actually 19," said Imahara. Pause, lets take a look at this list really quick. Notice after salt the list pretty much repeats itself? That's because the potatoes are fried twice — once at the factory, and again in the restaurant. So let's just scratch out the repetitive ingredients, now we're left with 13 — which is still relatively high.

The remaining ingredients, as Imahara explains, are used to preserve the fries after they are pre-cooked. The only difference between the frying process that is started at the suppliers and those in the individual restaurants, is the addition of TBHQ — which is found in some crackers, pet foods and even skin care products.

Reactions to the campaign — which answers other questions about McNuggets and Coca-Cola — have been mixed. And Roberto Ferdman, a blogger for The Washington Post, points out the obvious — no one's eating at McDonald's for the health benefits.

You go through the drive through. Then an employee hands you the food through the window — are you really expecting a cook-to-order kind of health meal anyway?

Ferdman points out, "people visit cheap burger chains for a respite from their (hopefully) healthier dietary regimens. ... There is such a thing as too much information — and when it comes to fast food french fries, the less people know, the more they can enjoy the food. If only McDonald's would let them."

But still, Micky D's fries aren't all that bad, at least when it comes to fast food comparisons.  A small order of fries has about 230 calories.

And compared to other fast food chains, WebMD reports McDonald's fries are actually one of the lowest in calories and fat content including saturated and trans fats.

So hey, no matter how many ingredients are used to create those world-famous fries, at least you have one fact to make your self feel a little better as they go down the hatch: it could always be worse. Carl's Jr. ranked the lowest when it came to french fry health.

This video includes images from jordanalexduncan /  CC BY SA 2.0.