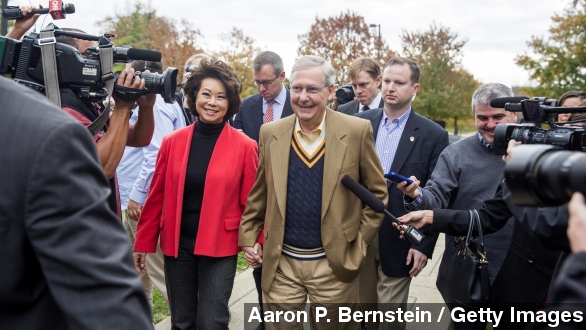 Looks like Mitch McConnell’s got something to smile about. The 72-year-old Kentucky senator gets to keep his job —

— after beating Democrat Alison Lundergan Grimes — whose grandmothers first introduced the candidate to Kentuckians in this TV spot.

ALISON FOR KENTUCKY: “This is our granddaughter, Alison Lundergan Grimes.”

And while Grimes was his opponent on paper, he made it pretty clear who he thought he was running against.

Definitely some tit for tat on that.

ALLISON FOR KENTUCKY: “Mitch McConnell wants you to think I’m Barack Obama… I’m not Barack Obama… and Mitch, that’s not how you hold a gun.”

In the end, high turnout in urban Louisville and Lexington wasn’t enough to give Grimes the edge. So what’s next for McConnell? For starters — a shot at becoming Senate Majority Leader if his Republican party takes control of the Senate.

In January he gave a more than 40-minute floor speech you could consider a preview of a Senate agenda under his leadership.

C-SPAN: “...allowing the senators to speak through an open amendment process, and extending the work week are just a few things the Senate could and should do differently.”

But that’s more about process. When it comes to the issues — energy — specifically coal — the economy, and Obama’s healthcare law played a big part in both candidates’ messaging during the campaign. But McConnell’s been less specific about the issues he’d try to tackle first once re-elected.

In fact, at a recent campaign event he told reporters, “It’s never a good idea to tell the other side what the first play is going to be.”