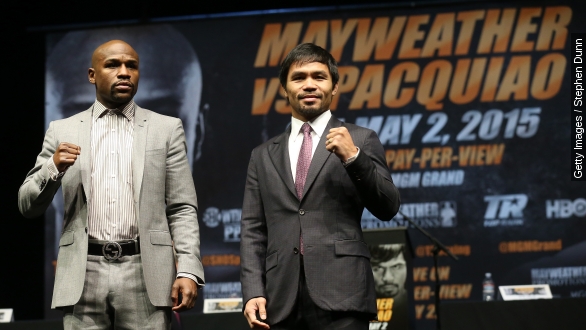 SMS
Mayweather Vs. Pacquiao: Promoters Spar Over Contracts
By Jay Strubberg
By Jay Strubberg
April 9, 2015
Contract disputes for the Mayweather vs. Pacquiao showdown are making the action outside of the ring almost as heated as it's sure to be inside of it
SHOW TRANSCRIPT

One of the most anticipated fights in boxing history is less than a month away, but contract disputes are making the action on the outside of the ring almost as heated as it's sure to be on the inside of it.

According to Yahoo, just 23 days before the fight between Manny Pacquiao and Floyd Mayweather Jr., Pacquio's promoter, Bob Arum, aired his frustrations with MGM Resorts and claimed no contract exists between the company and the promoters.

"Fight? We've got nothing. ... [The MGM is] going around saying, 'The fight, the fight, blah, blah, blah,' but they got nothing. They have no contract. … What is happening now is absolutely intolerable. For the MGM to think that everything is resolved and so forth, when nobody has even discussed terms, is the most insane thing ever."

Arum continued his long-winded rant against the gambling and entertainment giant over hotel rooms and with how many tickets were going to be allocated to each camp.

He also reportedly called the company's president a "moron." Ah, only in boxing and pro wrestling, right?

Later on, though, the Yahoo article was updated to note Arum received a drafted contract Wednesday, and said his lawyers were looking it over.

So, should we be concerned about whether the fight is in jeopardy now? That's still unclear, but probably not.

Floyd Mayweather, Jr. vs. Manny Pacquiao has been billed "the Fight of the Century" for a reason. And there's potentially hundreds of millions of dollars in revenue at stake.

"There's been an incredible demand by everyone all over the world to attend this fight. So, ticket prices will range from $1,500 to $7,500," Leonard Ellerbe, CEO of Mayweather Promotions, said.

Plus, Leonard Ellerbe, the CEO of Mayweather Promotions, says Arum is really just hamming up controversy to grab more attention for the fight, and says he knows full well the contract details.

"The bottom line is this: Bob cannot stomach the fact that he is not the lead promoter. Reality has set in, and this is typical Bob."

This also isn't the first time the two promotors have butted heads over the business side of the industry.

According to SB Nation, last year the promoters for both boxers squabbled over signs advertising an upcoming Mayweather fight displayed at MGM during a Pacquiao fight.

Hey, worst case scenario: if the Mayweather/Pacquiao fight falls through, at least they'll have a back up plan: just let the three suits duke it out. Triple threat match, anyone?