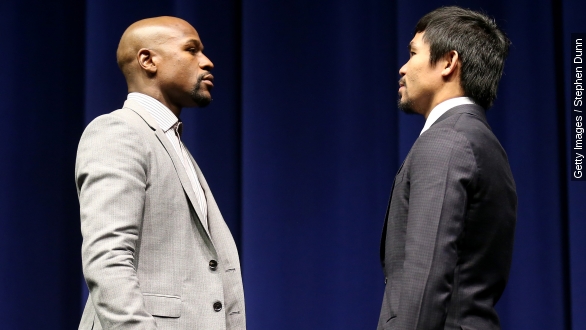 It's being called the fight of the century. But the closer the Floyd Mayweather Jr.-Manny Pacquiao fight nears, the more scrutiny it's getting.

If a $100 price tag to watch the bout on pay-per-view wasn't enough to make people angry, Mayweather's past involving domestic abuse and boxing's do-nothing approach certainly is.

Days before the May 2 bout, some are calling for a boycott of the fight.

"I will not promote, watch, nor report on Mayweather's fight. I will boycott it, and I urge you to as well," ESPN's Keith Olbermann said.

Mayweather has been arrested and charged in several domestic violence incidents since 2001. Most recently, he pled guilty to one count of misdemeanor battery in a domestic violence case in December 2011 and was sentenced to 90 days in jail.

Liberal blog ThinkProgress's headline urges people, before watching the fight, to watch an interview with Mayweather on ESPN where the boxer avoids questions about his past issues with domestic violence.

And the hashtag #BoycottMayweather is starting to pick up steam on Twitter, a trend that's likely to continue this week as the fight nears.

"For his part, Mayweather has had to do nothing to win over the public but sit back and allow the media to focus on what he wants them to see: his ridiculously lavish Vegas abode, his collection of luxury cars, his gold-plated garbage bags full of money."

While the issue of domestic violence and professional sports isn't exactly new, it has gained heightened attention after the NFL's Ray Rice debacle.

Now it's certainly unreasonable to believe all of the 3 million-plus viewers expected to tune in for the fight will boycott it. The fight is expected to bring in some $400 million in revenue.