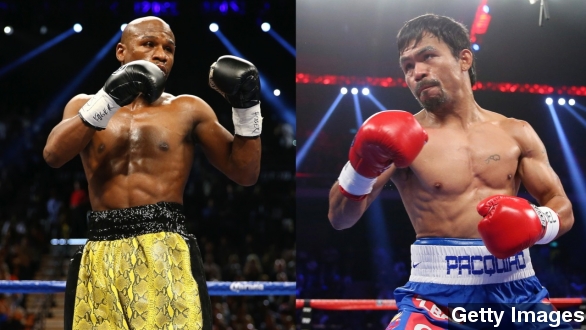 It's official: boxer Floyd Mayweather announced he and Manny Pacquiao will square up in the ring May 2 at the MGM Grand in Las Vegas.

Mayweather made the announcement by showing off a few signatures via the social media app Shots. Mayweather is an investor of the app.

According to ESPN, the agreement had been signed for days — and contracts were also signed by HBO and Showtime, which will surely make this boxing match one of the biggest spectacles in boxing history. Mayweather and Pacquiao agreed to a 60-40 split of the revenue — which could be hundreds of millions of dollars.

After the announcement, Pacquaio tweeted, "I am very happy that Floyd Mayweather and I can give the fans the fight they have wanted for so many years."

"Finally" is a word closely associated to this particular matchup because Mayweather and Pacquiao are considered living legends — and they almost agreed to terms in 2009. The anticipation has been stewing ever since. (Video via Fox Sports)

A writer for Yahoo Sports says Mayweather vs. Pacquiao won't exactly breathe new life into the sport of boxing, but it'll still be one heck of a fight: "May 2 will be a great day for boxing. Any suggestion otherwise is contrarian ridiculousness."