Mayor Accused Of Throwing Gang Sign, But Was She Pointing? 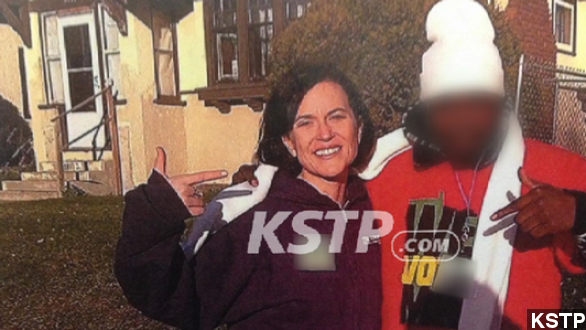 The story has sparked a lot of outrage — let's go ahead and check out few seconds.

KSTP: "They say there's no evidence he belongs to a gang but that he has connections to gang members. ... And she's giving the gangs something to flash around and say, 'Look we've got the mayor on our side, even the mayor's with us.' That's bad."

Wait — let's back that up and take a closer look at the said gang sign.

Now, does it look like maybe the two were just pointing at each other? The Twitterverse seems to think so. #Pointergate is trending on the social media network, and there's no shortage of opinions on the subject.

KSTP talked to local law enforcement who insisted the gestures were gang related but since the hype, the station released an apology — one that wasn't very apologetic.

Here's part of their statement: "Multiple sources from several law enforcement agencies told 5 EYEWITNESS NEWS the photo had the potential for undermining the work they are doing on the streets. 5 Eyewitness News blurred the individual’s face and did not name the group he was working for because police called into question only the judgment of Mayor Betsy Hodges."

But KSTP running the story and leaving holes in it is a different issue in itself — we'll first point out the blurring of the word "vote" on the man's shirt.

Talking Points Memo notes what else KSTP left out. "The photograph was taken during an event put on by the Twin Cities charity Neighborhoods Organizing for Change," and "the young man, identified in the news segment simply as a 'criminal,' was a volunteer."

In a behind the scenes video published by the charity, we hear from the man in the photo himself, who we now know is Navell Gordon. He is a convicted felon, but speaks of the desire to better his life.

Neighborhoods Organizing for Change: "I made some mistakes in life, I can't vote, I'm not ashamed to say that. But I'm working on fixing that right now so I can be able to vote for my next president."

Navell Gordon had a very public and controversial run in with law enforcement just back in Sept. The StarTribune reports Gordon was in a grocery store collecting signatures for a petition to allow felons to vote.

He was then reportedly approached by an officer who went on to tackle and handcuff Gordon. The officer reportedly went on to threaten to shoot witnesses who were protesting. (Video via YouTube / Wintana Melekin)

Now back to Mayor Hodges — hmm, what a familiar gesture.

She writes, "I posit, another reason the Mayor was targeted in the story is the fact that she has demonstrated courage by speaking publicly about much-needed reforms within the Minneapolis Police Department, including the body-cam pilot project. ...  Resistance to change comes in many forms, and sadly this is one of the worst examples of such resistance."

We'll reiterate, that was just one argument. But we will add it seems the Minneapolis Police Department should have known the backstory of the photo — the department posted this tweet, captured by Daily Kos, apparently showing Minneapolis police chief Janee Harteau at the event. That picture was later deleted from Twitter.

Mayor Hodges did release a statement saying in part, "The more supportive we can all be of people who are making better choices now, the better off we'll all be in the future."

Her rep also added that Hodges and Gordon were just pointing at each other.

This video includes images from Tony Webster / CC BY SA 3.0 and Michael Hicks / CC BY 2.0.