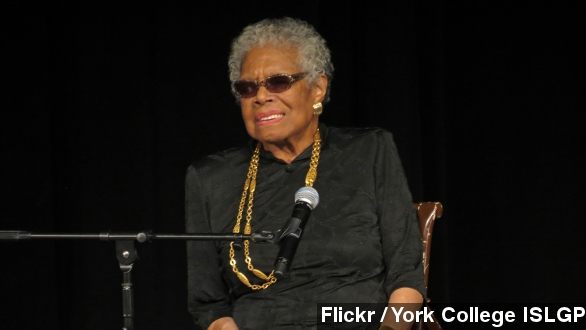 SMS
Maya Angelou, Civil Rights Activist And Poet, Dies At 86
By Lauren Zima
By Lauren Zima
May 28, 2014
The iconic writer and civil rights activist was found at her home. She had been facing health problems.
SHOW TRANSCRIPT

"Sources with knowledge tell us she passed away overnight at her home in Winston-Salem. The mayor tells us she was found overnight by her caretaker."  (Via Time Warner Cable News)

WGHP in Winston-Salem reported the same, though it said the renowned civil rights activist was found by her caretaker Wednesday morning.

Angelou was set to receive the Major League Baseball Beacon of Life Award on May 30 but canceled the appearance for health reasons.

Angelou is perhaps best known for her 1969 autobiography "I Know Why the Caged Bird Sings." (Via Amazon)

"I know what the caged bird feels when the sun is bright on the upland slopes, when the wind blows soft." (Via YouTube / visionaryproject)

But she has been celebrated for her poetry, civil rights work, filmmaking and more. She has received dozens of honorary doctorates and awards, including Grammy Awards.

She was also awarded the Presidential Medal of Freedom in 2011. (Via Los Angeles Times)

Angelou was active on Twitter. Her last message was sent May 23.

"Listen to yourself and in that quietude you might hear the voice of God." (Via Twitter / @DrMayaAngelou)