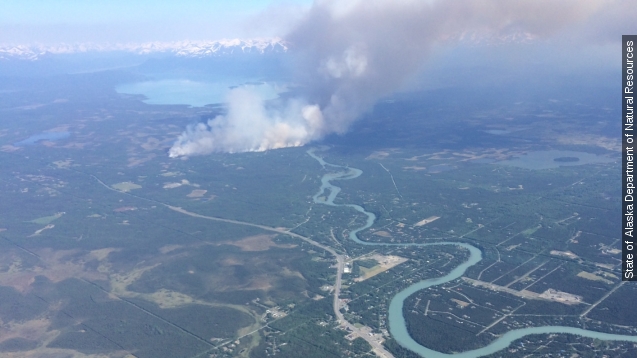 SMS
Massive Wildfires Fueled By Dry Weather In Alaska
By Jake Godin
By Jake Godin
June 16, 2015
Two massive wildfires have broken out in Alaska, and the dry weather isn't helping. Hundreds of homes have already been evacuated as the fires grow.
SHOW TRANSCRIPT

Dry, windy conditions have created a dangerous climate for Alaskans as two large wildfires have broken out in quick succession.

"And I'm tellin' ya I was right in the thick of this thing and it was coming right to me. And there's a wall of flame that's 150 foot wide by 150 foot high and I go there goes something burning up and this moving like hell coming toward me," Frank Cross, a fire evacuee, told Alaska Public Media.

The Sockeye Fire, which is burning about 80 miles north of Anchorage, started as a small two acre fire on Sunday but has grown to around 6,500 acres.

Another, the Card Street Fire, on Alaska's Kenai Peninsula started as a one acre fire on Monday but quickly grew to a 640-acre fire by the end of the day.

The Sockeye Fire has forced about 210 residents to evacuate while the Card Street Fire currently threatens approximately 200 more homes. Hundreds of emergency workers have been called to help stop the fires' spread. (Video via YouTube / NDjinnn)

A large portion of Alaska, nearly 249,000 square miles, is currently under a red flag fire warning due to low humidity and high temperatures. Speaking to NBC, the spokesman for the Alaska Fire Service said "much of the state is ripe for fire."

Temperatures where the Sockeye Fire is burning were as high as 30 degrees above average for this time of year, according to The Washington Post.