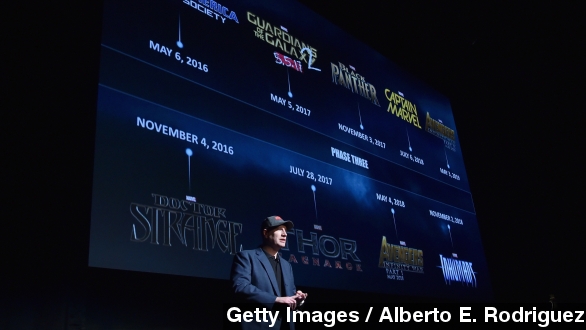 There will, of course, be another Thor, another Captain America and a two-part ending to the Avengers saga. But it's the new characters who are getting the most buzz — especially Black Panther and Captain Marvel.

Why those? Because each film will be the studio's first attempt to center a movie around a black character and a woman — or at least the first in Marvel's new, super-successful cinematic universe.

The Black Panther was the first black superhero to get his own mainstream comic book. The film is set for a late 2017 debut and will star "Get on Up" lead Chadwick Boseman.

Captain Marvel refers in this case to the character Carol Danvers. That film is scheduled for a Summer 2018 release.

The announcement is pretty big news for some comic book fans, who have noted that, while comics themselves are more diverse than ever, the recent block of movies have focused pretty much exclusively on white men.

Earlier this month, Warner Bros. Studios and DC Comics seemed to get the drop on Marvel when they announced their upcoming superhero movies and seemed ready to claim a couple of firsts with their Wonder Woman and Cyborg films.

NERDIST: "This means DC is beating Marvel to superhero flicks starring a woman and a person of color. Could DC wind up actually overtaking the house of ideas?"

Not to be outdone, Marvel stole one of those achievements back with Tuesday's announcement. While Wonder Woman will beat Captain Marvel to the box office by a year, audiences will see Black Panther more than two years before Cyborg, which is set to debut in 2020.

Of course, it's not really a competition, but, as Feige admitted to IGN this summer, audiences have been waiting for some diversity for a long time.

"It's a question I get asked more than anything else. More than 'Iron Man 4,' more than 'Avengers 3.' ... I think that's something that we have to pay attention to."

All in all, the two studios have committed to about 30 superhero movies through 2020, with room to expand. That is a lot of superheroes, and if audiences start getting bored, DC could miss the trend entirely: Marvel has four movies set for release before the next offering from DC.