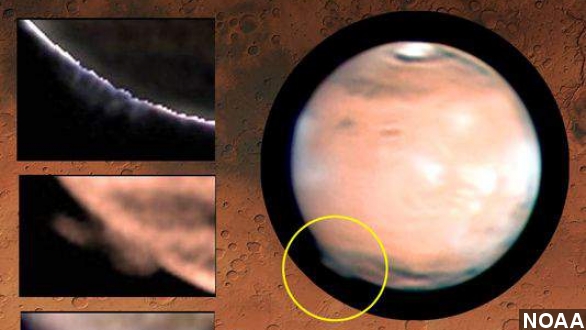 Massive, towering plumes stretching into the martian sky. Sounds like something out of a sci-fi novel, right? Well, they could be, because scientists are pretty stumped.

The plumes, which reportedly reach more than 150 miles above the surface of Mars and spread between 300 and 700 miles wide, have appeared at least twice on the red planet.

But it wasn’t astronomers in a multibillion-dollar observatory who first laid eyes on them.

That credit goes to patent attorney by day and amateur astronomer by night Wayne Jaeschke, who first spotted the plumes and posted images of them on his blog.

The Pennsylvania man told National Geographic, "I sent a couple of frames to some guys I know in Australia and asked, 'Am I seeing things?'"

He wasn't, and now scientists are looking into it. One letter published in Nature raises some possibilities, but no solid answer.

And a planetary scientist at the European Space Agency told BBC, "It raises more questions than answers."

Not a lot of help, but there are some theories floating around. One is it was a giant cloud of carbon dioxide, water or dust — though it rose to a higher altitude than clouds normally appear on Mars.

Another is it was a giant aurora, kind of similar to the Northern and Southern Lights we see here on Earth.

Whatever it is, scientists aren't entirely sure, but you can read their best guesses over at Nature.com.