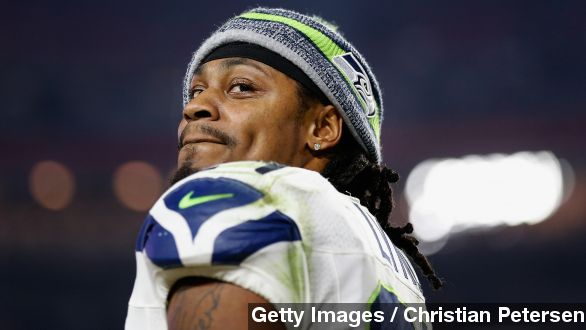 Seattle Seahawks running back Marshawn Lynch spoke up for the first time about the controversial play call that abruptly ended the teams' chance at Super Bowl glory.

In an interview with Turkey’s top sports network, Lynch says, he, along with pretty much the rest of the viewing public, thought head coach Pete Carroll was going to have Russell Wilson hand him the ball with victory just one yard away.

"I was expecting the ball."

But he didn't stop there. Lynch also added some thoughts on the decision-making process, implying maybe there was more at stake than just a run or a pass play. The clip is dubbed, but you can hear Lynch if you listen closely.

"When you look at me and you let me run that ball in, I'm the face of the nation. ... I don't know what went into that call. ... Maybe it was a good thing I didn't get the ball," Lynch said.

Several outlets picked up on those remarks, which seem to allude to an ongoing conspiracy theory that the play call had more to do with his eccentric personality rather than coaching strategy.

Basically, the theory is that had Lynch gotten the ball and scored, he would've been celebrated as a hero instead of Seahawks poster child Russell Wilson — assuming the pass went in his favor — and that would've somehow been bad for either the team or the league.

The theory picked up steam when NFL.com's Michael Silver reported that an anonymous and frustrated Seahawks player said, "That's what it looked like."

Though, it's worth noting that remark was allegedly made in the locker room right after the Seahawks' crushing Super Bowl defeat. But another sports writer claims to have heard something too.

Sunday, one Twitter user who appeared to agree with the sentiment said, "RUSSELL WILSON- MORE HANDSOME THAN THE BEAST. SIMPLE"

However, many sports analysts feel this conspiracy theory really doesn't hold up.

"It's utter nonsense. ... It really is as far out there as you can possibly get with a theory. ... He's a different guy to deal with, but what he brings on the field they love," ESPN radio host Bob Stelton said.

"Didn't they give Marshawn Lynch the ball on the play before? On first down? And then he got tackled on the one? On first first down, which should completely fly in the face of any conspiracy theory that they were somehow thinking about endorsements and Russell Wilson is the face of the franchise," ESPN's Michael Smith said.

Either way, an NBC sports writer says, when you boil it all down, all that really matters is what the players think happened.

"If Lynch and other Seahawks players believe that the team chose to throw and not to run in order to prevent Lynch from becoming the ... 'face of the nation,' coach Pete Carroll will have plenty of additional work to do to get the players to turn the page on the 2014 season."