Marshawn Lynch Lacks Words For Media, But Not Personality 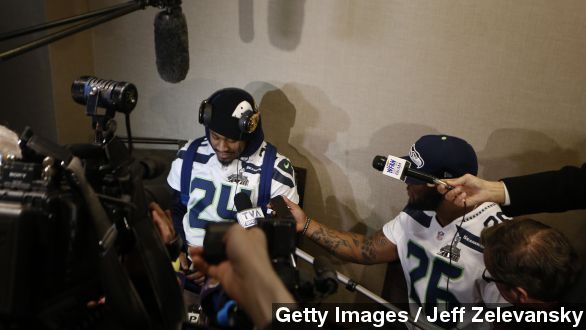 If you’re an NFL fan, we’re sure you’ve heard of Marshawn Lynch. But have you heard from him?

“I really ain’t got too much to say, boss. … I’m just here so I won’t get fined,” Lynch told reporters last year.

The Seattle Seahawks RB doesn’t give long interviews and generally likes to keep a low profile, especially around the media  — which is costing him.

After Sunday’s game loss against the Chiefs, Lynch dipped out before speaking to reporters — something that wasn’t a total shocker to some.

According to the NFL’s media policy, “Players must be available to the media following every game. … It is not permissible for any player or any group of players to boycott the media.”

Players holding interviews are important for the media to get quotes. If no players talk, then reporters can't get those quotes. That could lessen the NFL media coverage and the league’s exposure to the public.

And it’s not just inside the locker room where Lynch is avoiding the media.

A TMZ reporter asked Lynch, “Does the velvet rope really help with the Lamborghini?”

His attitude is affecting his interviews, and it’s reportedly wearing thin his relationship with Seahawks execs too. According to this ESPN report, Lynch isn’t expected back in Seattle next season because of how he's behaved.

But none of this is to say Lynch doesn’t have personality.

“On the really crazy nights, Lynch has been known to return to Applebee’s,” ESPN reporter Kenny Mayne joked.

And, of course, there’s his love for Skittles on the sideline — which earned him a pretty lucrative deal with the candy company in the offseason. (Video via Skittles)

Lynch supposedly has a compassionate side too. This happened Tuesday, a day before his fine.

“Jason Lynch, who you see is no relation, lost his wallet at a gas station outside Seattle … The star RB found the wallet. Marshawn then took time to drop it off at Jason’s house. That's nice,” CBS reports.

But there may be a simple reason as to why Lynch is so reserved toward the media.

A Seattle Times article from January says his mother, Delisa, always told her son: “Don’t talk about it. Be about it.”

And being about it he is. The Super Bowl-winning RB is currently leading the league in rushing touchdowns and is top five in carries and yards. Lynch and the Seahawks play the Arizona Cardinals on Sunday.