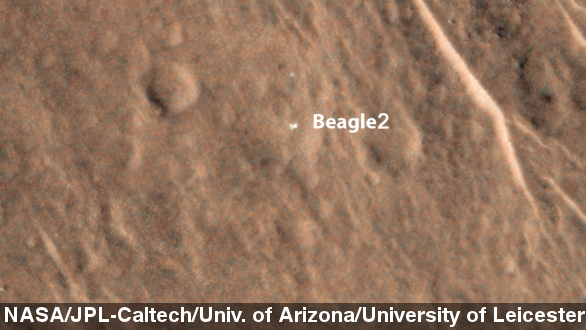 Researchers have spotted a Mars lander presumed lost for 12 years.

The UK-led mission was scheduled to land on Christmas Day, 2003. Beagle 2 was supposed to use tools on a deployable arm to hunt for signs of life in the rocks and soil of its landing site. (Video via European Space Agency)

But the lander never established communication from the surface, leading officials to believe the space mission, which cost as much as $80 million, had been a bust.

A leading theory was that the soft landing was, in fact, a hard landing at high speed — that Beagle 2 hadn't touched down so much as it had plowed right into the surface. (Video via The Telegraph)

But images from the Mars Reconnaissance Orbiter show other evidence of the lander's arrival, including possible parachute and heat-shield components.

It appears the deployable solar panels that would have powered the lander and its communications just didn't deploy.

"The movie you're watching here is a sequence of three HIRISE images that were taken of an object that might be the Beagle 2 lander in the Isidis Planitia," said Jet Propulsion Laboratory geologist Timothy Parker.

"You get different glints off that target as that sun angle changes. Those glints show you've got flat metallic surface, and it's exactly the right size," explained Beagle mission manager and University of Leicester Professor Mark Sims.

There's no hope of reactivating the lander, but all is not lost. Sky News reports tech from Beagle 2's deployable arm will make its way into the European Space Agency's ExoMars rover, slated for launch in 2018.