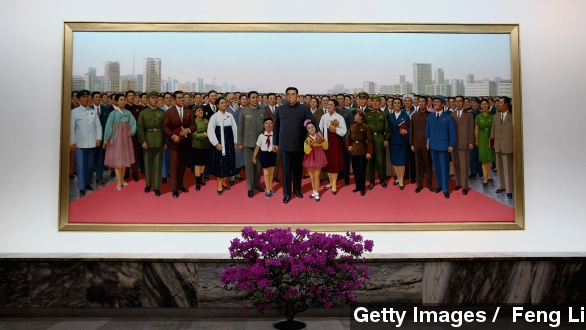 Unlike the typical aggressive behavior we hear about coming out of North Korea, Friday brought us some different news — a marriage.

Kim Jong-un’s younger sister, Kim Yo-jong, has married, it seems. According to a new report from Yonhap News Agency, she got married some time last year and was spotted wearing a wedding ring in photos published by state-run media. (Video via KCTV)

The senior Choe has been involved in several diplomatic missions, including a meeting with Chinese President Xi Jinping in Beijing in 2013 and visits to both South Korea and Russia last year.

The marriage of North Korea’s two most powerful families, if true, is a move Bloomberg’s South Korea correspondent says “adds to signs the Kim family is tightening its grip on power.”

The appearance of Kim Yo-jong is somewhat of a new thing, with the North Korean leader’s sister making her first public outing in March of last year.

And she might be being groomed for a leadership role, considering both that recent appearance and her new title: “senior official of the Party Central Committee."

But, as is the case with most of the inner workings of North Korea’s elite, there’s really not much else known about Kim Yo-jong, her husband or even her brother for that matter.

Take Kim Jong-un, for example. Even as the most public official in the country, so little is known about Kim Jong-Un's family that it took former NBA star and improbable U.S.-North Korea envoy Dennis Rodman to confirm Kim actually had a daughter in 2012. (Video via CNN)