Mario Is Now Self-Aware. What Could Possibly Go Wrong? 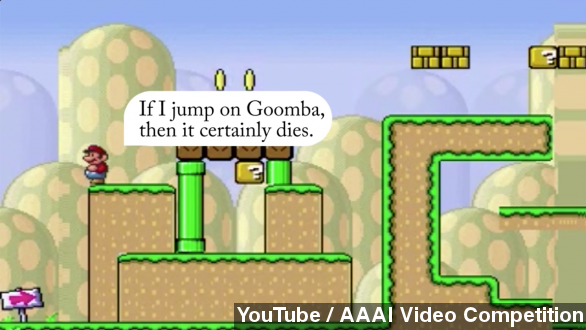 SMS
Mario Is Now Self-Aware. What Could Possibly Go Wrong?
By Matt Picht
By Matt Picht
January 19, 2015
Researchers have created a version of Super Mario World which learns to play itself based on experience and voice commands.
SHOW TRANSCRIPT

After spending more than 30 years at the mercy of a video game controller, Mario's finally getting some free will. German researchers at the University of Tubingen have created a self-aware Mario.

When a researcher says, "Hello, Mario."

The project — called "Mario Lives!" — reprograms a version of Super Mario World, giving the famous plumber the ability to play the game all by himself, with only minimal human interaction.

Their Mario can receive basic voice commands, learn about the world around him, and figure out how to navigate his environment.

If a researcher tells Mario, "Mario, don't be so happy."

After jumping on a Goomba, Mario remarks "If I jump on Goomba, then it maybe dies."

We leave that to his voice actor, Charles Martinet. "It's-a me, Mario! Woohoo!"

The nearly-sentient Mario has been met with some concern. The Verge questions the wisdom of "building self-aware AI, programming their creation with an insatiable desire for material wealth and teaching it how to kill."

The Guardian's Charlie Brooker is more sympathetic. "This meta-Mario ... is painfully aware that he only exists within a meaningless two-dimensional artificial framework from which he can never escape. As such, he's more advanced than I am."

Mario games actually have something of a history with artificial intelligence projects; the game's clear and simple rules make it relatively easy to teach to a computer.

And the sentient Mario's programmers actually built some of his abilities on a pathfinding algorithm which lets Mario figure out how to play his own game.

The Mario project was created for the Association for the Advancement of Artificial Intelligence's video contest. It's going up against a swarm of glowing robots and a self-driving golf cart, among other projects.