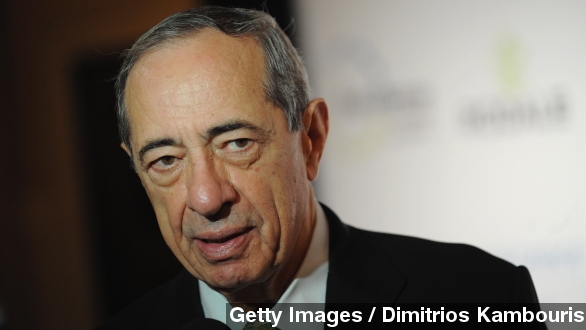 Mario Cuomo, former New York governor and father of the state's current governor Andrew Cuomo, has died. He was 82.

Cuomo had recently been hospitalized with a heart condition. A family friend confirmed with the New York Times he passed away Thursday at his Manhattan home after months of ailing health.

His death came just hours after his son Andrew was inaugurated for his second term.

Fittingly, WABC says the elder Cuomo made his last public appearance on stage during his son's re-election celebration in November.

Mario Cuomo served three terms in office for New York from 1983 to 1995. He was one of the most popular Democrats of his time and was known for his liberal views and his hardline stance against Ronald Reagan's policies. (Video via NY1)

New York's 52nd governor rose to fame during his keynote address at the 1984 Democratic National Convention, earning the favor of Democratic supporters on a national scale. (Video via YouTube / Educational Video Group)

In subsequent years, many supporters wanted him to run for president but Cuomo decided not to seek the nomination in both 1988 and 1992. (Video via CNN)

Andrew Cuomo reflected on his father's legacy Thursday, saying, "He's in the heart and mind of every person who is here. ... And his inspiration and his legacy and his experience is what has brought this state to this point."