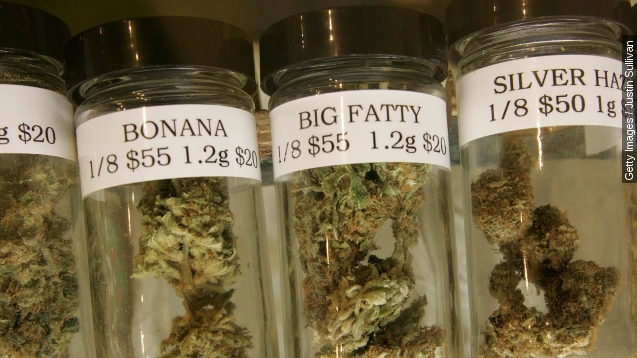 By Matt Moreno
June 10, 2015
Colorado will reduce its state marijuana sales tax to 8 percent by 2017 as Oregon considers a tax that might better compete with neighboring states.
SHOW TRANSCRIPT

As if marijuana wasn't legal enough in Colorado, consumers are now getting a bit of a tax break. Starting July 2017, medical marijuana sales will be subject to an 8 percent sales tax, replacing the current 10 percent tax.

At the current rate in Denver, Tax Foundation estimates a $30 one-eighth ounce of marijuana also has about $8.59 in taxes added after excise, local and state taxes are all factored in — about a 29 percent overall tax. (Video via WCPO)

Colorado Gov. John Hickenlooper signed the provisions into law. Even though he's been critical of legalization since it passed by a 55 percent majority vote in 2012, Hickenlooper's long said he's wanted to change how the drug is sold. (Video via KMGH)

"No one wants it to be a cash business. You want to guarantee corruption and organized crime involvement? What better way than to make it a cash business?" Hickenlooper told CNBC.

The tax break is intended to somewhat curb those black market dealings.

It's a similar approach to what Oregon is trying out, where pot gained voters' approval in 2014.

The Washington Post reports marijuana in Colorado was a $700 million industry in 2014 with the state collecting about $76 million in tax revenue, licenses and fees. (Video via CNN)