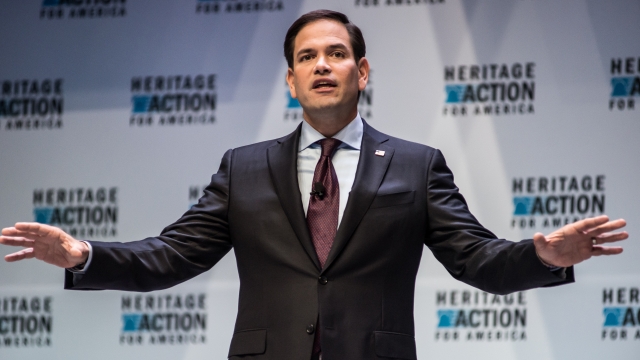 It's probably a few months later than he had hoped, but Marco Rubio has finally been nominated for something in 2016.

The Florida senator is one step closer to reclaiming his seat after coasting to a win over real estate developer Carlos Beruff with 72 percent of the vote in the state Republican primary.

It's somewhat surprising to see Rubio running at all since he said he would put his political career on hiatus after losing the Republican presidential primary to Donald Trump.

Now, Rubio says he wants to serve in the Senate — at least for the time being. He wasn't willing to say for sure whether he would stay for his full six-year term.

"Can you now commit to voters here in Florida that you will serve your entire six years if you're elected?" Manu Raju asked Rubio.

"No one can make that commitment because you don’t know what the future’s going to hold in your life, personally or politically," Rubio replied.

That was a pledge his Democratic opponent was happy to make on Twitter.

Hedging his bets may not be a bad strategy for Rubio. Trump is behind Hillary Clinton in most presidential polls, and if he loses, the GOP could opt to nominate a more moderate, establishment-approved nominee in 2020.

Rubio will square off against Rep. Patrick Murphy in his re-election bid. RealClearPolitics shows Rubio will start his campaign with a six-point edge over Murphy.