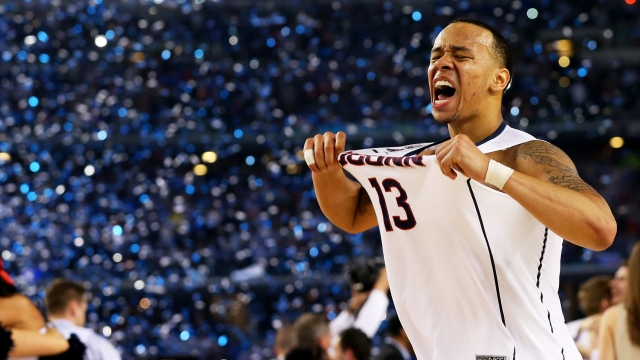 SMS
March Madness: The Real Numbers, Costs And Odds
By Matt Moreno
By Matt Moreno
March 8, 2016
An estimated 60 million Americans will fill out brackets for March Madness. There's a 1 in 9.2 quintillion chance of getting a perfect bracket.
SHOW TRANSCRIPT

An estimated 60 million Americans will fill out March Madness brackets this year — all with a 1 in 9.2 quintillion chance of filling out the perfect bracket.

March Madness is a fun time for you, family, friends, co-workers — but maybe not your managers.

Businesses lose an estimated $1.9 billion during the tournament due to unproductive workers.

Thanks for nothing, Christian.

If the tournament is coming to your city, though, you're in luck. The 2016 Final Four alone is expected to bring in 70,000 fans and have a $300 million impact on host city Houston.

Feeling down after your bracket got busted? You're not alone.

Drowning your sorrows instead? 17.5 million barrels of American beer will be produced in March — that's 3.5 million more than most other months.

This video includes a clip from the Greater Houston Convention and Visitors Bureau, statistics from WalletHub and images from Jason Dean / CC BY 2.0, MarLeah Cole / CC BY 2.0 and Getty Images.