March Madness: No Predictions, Just Stats To Help You Along 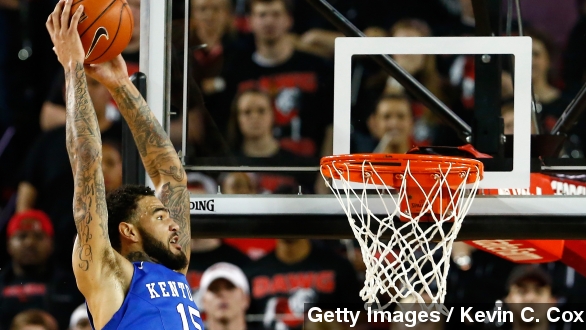 SMS
March Madness: No Predictions, Just Stats To Help You Along

By Jay Strubberg
March 16, 2015
The NCAA Tournament is officially set. Here's a few pointers to help you fill out your bracket.
SHOW TRANSCRIPT

Oh, let the madness begin! The NCAA Tournament is officially set. So here's a quick run-down, as you scurry to fill out your bracket this year.

No surprise here: the undefeated Kentucky Wildcats are the top seed overall. They're placed in the Midwest Region. Virginia's early loss in the ACC Tournament cost them a No. 1 spot, so Villanova slides into the East. Duke and Wisconsin fill out the remaining No. 1 seeds.

Now, seven of the last 10 NCAA national champions have been one seeds, so it's a good conservative bet to have those teams go deep into the tournament.

On the flip side: the 16 seeds such as Coastal Carolina, Lafayette and the other small schools we all love to root for ... well, good luck, because they're gonna need it. Not a single number one seed has ever lost in the first round of the NCAA tournament. Ever.

Beyond that, let's not kid ourselves. The rest is pretty much a crapshoot. Though there are a few more stats to keep in mind as you're ironing out your bracket.

History tells us you'll want to have some upsets, but don't get too wild knocking off favorites.

According to USA Today, "If you total the number of the seeds in your Final Four, you want to shoot for single digits or the low teens. Only six times has the total exceeded 14."

Of course, three of those six times occurred in the past four years. But, historically, historically, it's actually pretty rare for lower seeds to squeeze into the Final Four.

Then again, don't bend the coat hanger the other way. Only once in NCAA tournament history have all four No. 1 seeds made it to the Final Four. That was in 2008.

So, where's a good place for that random first round upset?

In the end, just like every year, we'll probably get surprises left and right. But this year, there's really been one team that has stolen the spotlight with an unprecedented run. Maybe you've heard of them.

"C-A-T-S! CATS! CATS! CATS!"
Or maybe you're tired of hearing about them. Yep, the Kentucky Wildcats are on the doors steps of NCAA history. (Video via Kentucky.com)

The Cats are lead by a cast of NBA-bound talent, with depth and incredible defense. They have their sights set on the first perfect season since 1976 and are, without a doubt, the favorite to win it all.

"I think I have the best team and the best players. I do. Now, does that mean we'll win? No, it doesn't. ... That's why this tournament is what it is," Kentucky head coach John Calipari said.

But, they're also the outright No. 1 seed, which, at least in recent years, hasn't equated to a lock for the national title.

And, the Prediction Machine — whatever that is — claims to use things like strength of schedule and other computer metrics to calculate the Cats odds. It says the team has about a 44 percent chance to win the championship.

So, good luck! And, if you miss a few, don't sweat it. After all, USA Today says the chances of getting every pick right is "1 in 9.2 quintillion. That's a nine with 18 zeroes" behind it.