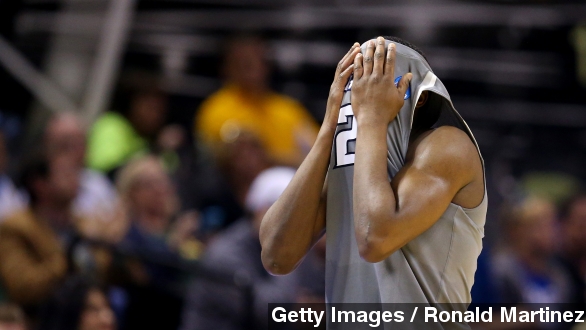 SMS
March Madness Could Cost $2 Billion In Company Time
By Evan Thomas
By Evan Thomas
March 13, 2015
Employers could stand to lose nearly $2 billion worth of employee time thanks to this year's NCAA basketball tournament.
SHOW TRANSCRIPT

March Madness could cost employers close to $2 billion this year, according to some estimates.

Outplacement firm Challenger, Gray & Christmas, Inc. multiplied together estimates of how many people get sucked into March Madness (about 60 million), estimates of how much time they spend working on brackets and streaming game footage at work (about 77.7 million man-hours), and the average hourly wage ($24.78).

It comes out to $1.9 billion worth of employer time.

And while desk jockeys are susceptible, so is anyone else with a modern smartphone or tablet. Or whiteboard. Challenger says it's going to be everywhere, no matter what employers do. (Video via ESPN)

"This tournament and the betting and bracket-building that come with it are ingrained in the national fabric. Trying to stop it would be like trying to stop a freight train."

One workforce analyst told Fortune: "The absenteeism associated with major outbreaks such as avian flu and SAARS is less than absenteeism related to major sporting events. So if you can't beat them, join them."

People are going to be watching either way. Nielsen data indicated the NCAA basketball tournament pulled in its largest cable audiences ever in 2014, with some games pulling in more than 10 million viewers at peak. (Video via AT&T)

The American Gaming Association predicts Americans will crank out some 70 million brackets total and place $2 billion in various bets on the tournament.

For those of you looking to be part of the Great American Distraction, you have less than a week to get ready. Selection Sunday is March 15 with the first round only two days later.