March Madness Bracket Busted? Here's How You Can Still Win Your Pool 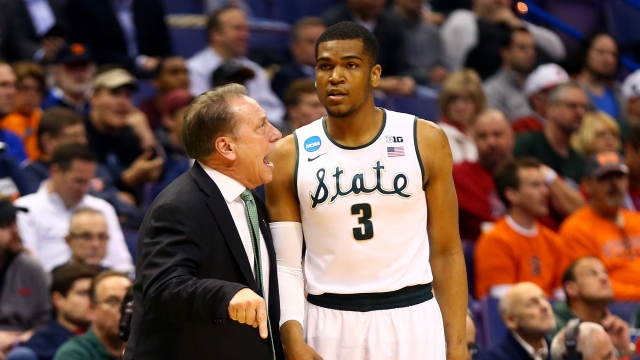 Basketball fans across the country saw their March Madness brackets take a huge hit when Michigan State was knocked out of the tournament in the first round on Friday.

And if you didn't call Middle Tennessee State's win, we've got some good news for you. There could still be a chance you could win your pool ... probably.

First off, if you took Michigan State to the Final Four but not into the national championship game, you're probably fine. After all, you're not alone.

According to CBS Sports' Bracket Games, 65 percent of bracketeers picked Sparty for the Final Four, which more than doubles any other team in their region.

If you had Michigan State going further than that — as 42 percent of brackets did — you're going to need a little more help. Essentially, you need to bring everyone else in your pool down with you.

How likely is this to happen? According to the bracket experts at FiveThirtyEight, the odds of a non-UVA team out of the Midwest making the title game is 17 percent. So, not impossible.

If you took Michigan State all the way, though, things are looking pretty bleak. You'll probably need an out-of-nowhere champion no one in your pool picked.

This is where the size of your pool comes into play. The bigger it is, the more likely someone could score big on a wacky pick, and the less likely you are to pull off an improbable comeback.

You'll need a team to make a run to the title game practically nobody picked, preferably out of Michigan State's region, the Midwest. And you'll want someone other than Virginia, whom roughly a quarter of CBS brackets have in the Final Four.

Of course — and this almost goes without saying — you'll need to nail as many picks as you can for the rest of the tournament. Then maybe, just maybe, you'll have a chance.

This video includes clips from Michigan State University, The University of Virginia and WISH and images from Getty Images.