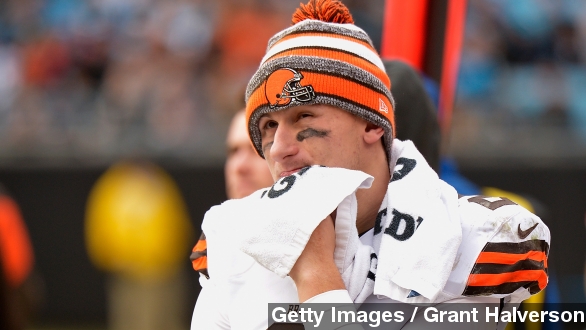 Thing is... none of those things have happened.

But it’s all business as usual for the former Heisman trophy winner.

There was his post-draft celebration, his Vegas excursion and — who can forget — playing his own special version of "Duck, Duck, Goose" over the summer.

And, like they often do, regardless of your opinion of how Manziel spends his free-time, his off-field antics have drawn the ire of the media.

ESPN's Skip Bayless even accused him of having a drinking problem.

"If you wanna call him an alcoholic, I'll go that far. I think he can't handle his alcohol," said Skip Bayless.

Bayless, who's been a Manziel supporter, blasted the Browns QB after he missed a treatment session for his injured leg following a night of partying. Though Manziel himself admitted he needed to shape up. (Video via TMZ)

"It's about action. Being accountable and doing what I'm gonna say instead of looking like a jackass," Johnny Manziel told reporters.

Browns' management has echoed that "actions speak louder than words" sentiment recently — probably because they've been down this road before with Manziel. And they’ve also made one thing very clear: Johnny Football is by no means a "lock" at starting QB next season.

And it's tough to argue against that thinking. Manziel's NFL career has, without question, gotten off to a rocky start.

In his much-hyped first NFL start, Manizel put up some very weak offensive numbers in the Cincinnati Bengals 30-0 blowout of the Browns.

"Tough. It was tough. ... I felt like I made a few mistakes throughout the game. ... I need to be better. I felt like it was a fail on my part," Cleveland Browns quarterback Johnny Manziel told reporters.

Then, a week a later, during the Browns loss to the Carolina Panthers, Manziel struggled again and also pulled his hamstring in the second quarter — an injury that put him out of action for the rest of the season.

All totaled, Manziel has completed 18 of 35 passes, with one touchdown, three turnovers and he's rung up a measly 175 yards in five NFL games, though those stats certainly haven't affected his endorsement deals thus far.

And, of course, poor Cleveland is the one that suffers yet again.

The Browns have shuffled through twenty-two different starting quarterbacks since 1999 and haven’t had a winning season since 2007.

So it's easy to understand the team's reluctance to cement an under-performer, especially one whose hype is slowly shifting toward distraction. (Video via Snickers)