Manny Pacquiao To Hang Up Gloves, Eyes The Political Ring 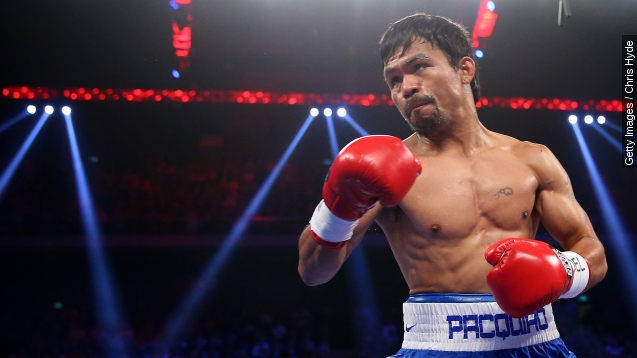 International boxing star Manny Pacquiao is stepping away from the sport in April.

Boxing promoter Bob Arum told both ESPN and USA Today that Pacquiao plans to hang the gloves up in the next few months with a final fight scheduled on or before April 9. Pacquiao will reportedly then focus on politics in the Philippines. (Video via Trinity Broadcasting Network)

The opponent isn't set yet, but Floyd Mayweather Jr. isn't on the short list. Mayweather retired in September after earning his 49th victory, and there's been no talk about him coming back for a fight against Pacquiao. (Video via HBO)

The Pacquiao and Mayweather fight was one of the most hyped, highest-grossing bouts of all time. Mayweather beat Pacquiao by unanimous decision in May. (Video via Showtime)

Juan Manuel Marquez's name is also being tossed around, but Arum says it's unlikely that will happen at this point.

Pacquiao's been involved with politics for years.

"Thank you to the U.S. for your support of the Philippines," Pacquiao said during a press conference.

He's been a congressman in the Philippines since 2010, and last week filed for candidacy to run for senator in 2016.

The 36-year-old has spoken before about corruption in the Philippines political system, something he's trying to change. There have also been rumors Pacquiao could be gearing up for a run at the presidency there.

Pacquiao will run for one of the 12 senate seats up for election in the Philippines, leaving behind a boxing career of 57 wins, six losses, two draws and 38 knockouts.